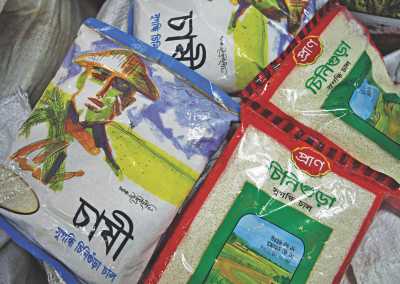 Aromatic rice exports have resumed after the government waived a three-year-old ban last month, encouraged by a bumper yield and good stocks at home.
Two major food processors -- Pran and Square -- have already shipped a total of 120 tonnes of aromatic rice, against demand mostly from migrant workers and non-resident Bangladeshis, said officials of the two companies.
Rice was shipped to the Middle East countries, the USA, the UK, Australia and Canada and other countries including South Africa, said exporters.
"The withdrawal of the ban will provide scope for the Bangladeshis abroad to taste locally grown aromatic rice instead of the ones exported from India and Pakistan," said Kamruzzaman Kamal, director for marketing of PRAN-RFL Group.
Pran sent the first consignment of aromatic rice this week, out of the total orders of 1,000 tonnes the company has received so far, said Kamal.
This is the first time the government has allowed export of aromatic rice since November 2008, when its export was banned amid allegations that parboiled rice was exported in the name of the aromatic variety.
The government kept a bar on rice exports since then to keep the prices of rice stable in the local market by improving supply.
But as rice production and stocks increased in the past two fiscal years with the prices remaining low, the government withdrew the bar on export on June 4 for the six months ending in December.
However, the bar on parboiled rice export remains, according to a gazette notification.
Monoj Kumar Roy, additional secretary to the commerce ministry, said, “The government has allowed exports considering 'satisfactory' production and enough stocks of parboiled rice. Inadequate space in the public warehouses is another reason.”
Rice production rose by around 1 percent to 33.73 million tonnes in the just concluded fiscal year from 33.54 million tonnes the previous year, enabling the country to become almost self-sufficient in its staple food and cut food grain imports by half.
"It (aromatic rice) is a premium item. Exports will enable farmers to get better prices," Roy added.
“The removal of the ban is also meant to support exporters to retain the market abroad,” he said.
Khurshid Ahmad Farhad, senior manager in charge of export at Square Consumer Products Ltd, said, “A good quantity of aromatic rice is likely to be exported because of increased demand ahead of the Eid festival.”
“We expect to export 250 tonnes of aromatic rice,” he said, adding that the company has already exported 100 tonnes.
He, however, said the export permission for six months is not enough to recover the market share that was lost because of the three-year-old ban.
"We have lost our market to the Indian and Pakistani exporters due to the ban. So, it is unlikely that we will recuperate the market share in six months. More time is needed," he said.
Before the ban on rice exports in 2008, Bangladesh exported less than 10,000 tonnes of rice per year. Of the amount, the volume of aromatic rice was less than 2,000 tonnes, according to exporters.
Export of aromatic rice grew by eight times to 1,600 tonnes in the fiscal 2007-08 from nearly 200 tonnes the previous year, according to Plant Protection Wing of the Department of Agricultural Extension (DAE).
The DAE wing issues phytosanitary certificates that are needed for exporting rice and other agricultural crops.
Till date, the DAE has issued such certificates to exporters to ship around 420 tonnes of aromatic rice, said an official of the DAE asking not to be named.