Petronas chafes at its role as Malaysia's piggy bank 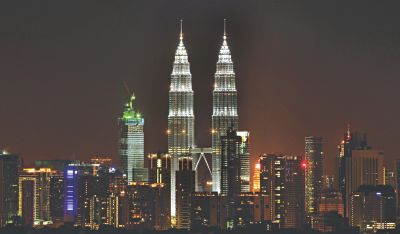 The Petronas Twin Towers are pictured in Kuala Lumpur. Petronas is Malaysia's largest single taxpayer and biggest source of revenue, covering as much as 45 percent of the government's budget.Photo: Reuters

State-owned oil company Petronas is tired of being Malaysia's cash trough. Its growing pique at the government flared into public view here in early June at the World Gas Conference.
Chief executive Shamsul Azhar Abbas took to the stage and declared that the government's policy of subsidising fuel was plain wrong. A murmur ran through the crowd -- his boss, Prime Minister Najib Razak, was sitting in the front row.
Moments later, Najib went to the podium himself to remind everybody that the subsidies -- for which Petronas foots the bill -- have "social-economic objectives."
The subtext of that rejoinder: Malaysians pay among the lowest electricity rates and petrol-pump prices in Asia. While the government has vowed to "rationalise" that, it's highly unlikely to happen before elections expected in a few months.
The polite but pointed disagreement was the latest sign of assertiveness from an oil company that prime ministers have treated as a piggy bank for pet projects since it was established in 1974.
Interviews with current and former officials and an examination of Petronas and government documents show that strains have been building behind the scenes over how much money the company hands over to the government in the form of fuel subsidies, dividends and taxes.
Financial data reviewed by Reuters show the government has increasingly relied on Petronas's payments -- a "dividend" to its sole shareholder -- to plug fiscal deficits that have begun to alarm ratings agencies and analysts.
The data also show these payments grew over the past several years as oil prices soared, along with government spending. But Malaysia's official accounts do not show how the money is being spent -- and the government has steadfastly refused to disclose any details about that.
Petronas is Malaysia's largest single taxpayer and biggest source of revenue, covering as much as 45 percent of the government's budget. Unlike other oil-rich nations such as Saudi Arabia, Norway or Brazil, Malaysia runs chronic, large budget deficits that have expanded even as oil revenues increased. Last year's fiscal gap, at 5 percent of gross domestic product, trailed only India's for the dubious distinction of biggest in emerging Asia, and it may widen this year.
Subsidies account for a big chunk of the deficit. They have other downsides as well, Shamsul noted in his speech to the gas conference. "Subsidies distort transparency, reduce competition and deter new investments," he said, adding that Petronas paid between 18 billion and 20 billion ringgit ($5.75-6.35 billion) a year to subsidise gas consumption.
Malaysia isn't facing a fiscal crisis. Foreign investors eagerly buy Malaysian government bonds, confident the country's reserves of oil, gas and foreign currency are deep enough to ensure the debt will be repaid.
That faith will be tested over the next few months.
Falling oil and gas prices will likely constrain Petronas's 2012 profits, and a worsening euro-zone crisis may hurt the country's exports. Smaller Petronas payouts and slowing economic growth would pinch government finances.
Shamsul argues now is an opportune time to pursue foreign acquisitions on the cheap as Malaysia's domestic energy supplies deplete. On Thursday, the company announced it was acquiring its Canadian joint-venture partner, Progress Energy Resources Corp, for $4.7 billion. More may be in the offing.
"Mind you, for that to happen, we need cash," Shamsul said in his speech.
The trouble is, the government needs the cash, too.
Petronas, Malaysia's only global Fortune 500 company, towers over the Southeast Asian country -- literally and figuratively. Its 88-storey twin towers, once the world's tallest buildings, dominate the skyline of Kuala Lumpur.
Petronas's oil and gas reserves rank 28th in the world, according to data from PetroStrategies in Plano, Texas, ahead of some better known players such as Norway's Statoil and CNOOC, China National Offshore Oil Corp.
Unusual for a state-owned enterprise, Petronas's debt is rated stronger than the sovereign state's. The company had about $15.6 billion in total borrowing as of March 31 and counts US insurer Aflac Inc among the debt holders.
Petronas' CEO and board, however, serve at the pleasure of the prime minister. Over the years, prime ministers have tapped into Petronas funds to build their dream projects and bail out their mistakes. Political leaders were used to dealing with yes-men in the company, which on Malaysia's organisation chart is part of the prime minister's office.
Now Petronas is trying to say no.
Like all state-owned oil companies, Petronas is expected to pass along a share of profit to the government, just as a private sector oil company pays dividends to shareholders.
Those dividends gobbled up almost 55 percent of its net profits in the fiscal year ended March 31, 2011, well above the average of 38 percent paid by national oil companies around the world, Petronas figures show.
Including taxes, export duties and the dividend, Petronas estimates its total payments to the Malaysian government added up to 65.7 billion Malaysian ringgit ($21.10 billion) in that fiscal year.
Petronas has been pushing for a new dividend policy that would set the annual payout to the government at 30 percent of profits instead of the flat 28 billion Malaysian ringgit ($8.75 billion) it will pay this year.
A lower payout would preserve money to reinvest in global oil and gas exploration in order to compensate for declining domestic supplies.
A Reuters analysis of Petronas and government financial data shows Petronas would have paid close to 17 billion ringgit in the March 2011 fiscal year if the 30 percent dividend formula was in place.
A smaller dividend payment would have deepened Malaysia's fiscal deficit, swelling it to about 6.5 percent of gross domestic product. That's nearly triple the average among the world's emerging-market economies, according to International Monetary Fund data.
With less Petronas money under the new formula, Prime Minister Najib would have three unpopular options: cutting spending, increasing taxes or ramping up the deficit. Worsening public finances could unsettle foreign investors, who hold about 39 percent of the government's local currency debt, the highest share in emerging Asia.