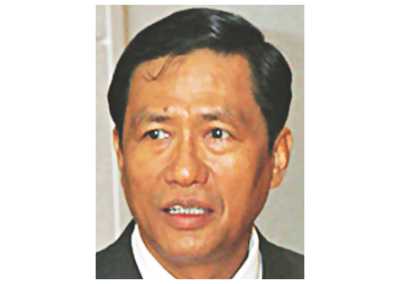 Deputy Foreign Minister of Myanmar Maung Myint arrived in Dhaka yesterday noon on a three-day trip to lay the groundwork for the upcoming visit by its president.
The minister will discuss and finalise the agendas for talks during the president's visit likely on July 15-17.
Foreign ministry officials said Maung will call on Foreign Minister Dipu Moni at her office at 11:30am today.
The meeting will be followed by annual bilateral consultations between the two countries at the foreign ministry. Foreign Secretary Mijarul Quayes and Maung Myint will lead their respective sides at the consultations.
Repatriation of Rohingya refugees, cooperation in the areas of energy, agriculture, education, trade and tourism and establishment of direct road and air links will be high on the agenda.
Maung's visit comes at a time when Bangladesh saw many Rohingyas intrude into its territory last month to escape sectarian violence in the Rakhine state of Myanmar.
Bangladesh shares a 271-km-long border with Myanmar.
Although the two neighbours have ratified 10 agreements including those in the areas of land boundary management, trade, transport, and narcotics control; many of them only exist on paper.
The volume of bilateral trade still remains very insignificant. In the 2010-11 fiscal year, Bangladesh's export to Myanmar stood at $9.65 million, while its import from Myanmar was at $175.7 million.