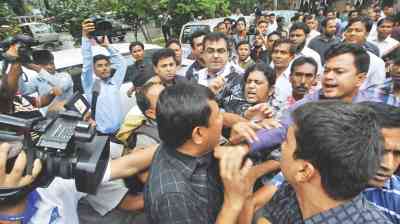 ATN Bangla newsmen swoop on Jahangir Alam Prodhan, a journalist of a Bangla daily, during a human chain near Jatiya Press Club yesterday. Prodhan had demanded the arrest of the private TV channel chairman and called for laying siege to its office.Photo: STAR

Some newsmen of ATN Bangla yesterday assaulted a journalist union leader in front of the Jatiya Press Club during a human chain organised to demand the arrest of the killers of journalist couple Sagar and Runi.
Jahangir Alam Prodhan, organising secretary of Dhaka Union of Journalists, came under attack as he was speaking at the programme at around 12:00 noon. As he blamed ATN Bangla Chairman Mahfuzur Rahman for the couple's murder, the journalists of the private TV channel swooped on him.
ATN Bangla termed the incident unwarranted and pre-planned, and alleged that it was done to divert the course of the Sagar-Runi murder case. The TV channel claimed it was its newsmen who were attacked.
In his speech, Prodhan, a journalist at the Bangla daily Kaler Kantha, said Mahfuzur must be arrested with his cronies. He also called for laying siege to the ATN Bangla office.
The situation went out of control when senior journalists of ATN Bangla joined the melee, instead of trying to calm things down.
Journalists from different media organisations formed the human chain demanding the arrest of the killers of journalist couple Sagar Sarowar and Meherun Runi.
The organisations include Jatiya Press Club, Dhaka Reporters Unity, Bangladesh Federal Union of Journalists and Dhaka Union of Journalists.
Witnesses said the ATN Bangla journalists beat up Jahangir indiscriminately. When he ran towards the Jatiya Press Club building for shelter, they chased and attacked him again.
At one stage, other journalists chased the newsmen of the private TV station and rescued Jahangir.
After the incident, journalists formed the human chain again and announced fresh programmes to press their demands. The event ended at 2:00pm.
Journalists will form a human chain and demonstrate before the Jatiya Press Club today and submit a memorandum to the prime minister tomorrow.
Sagar, news editor at Maasranga, and his wife Runi, senior reporter at ATN Bangla, were murdered on February 11 in their flat in the capital.
ATN Bangla boss Mahfuzur Rahman drew flak from the journalists' community after he made some uncalled-for remarks at a press briefing in London on May 30. He said, "Sagar and Runi were victims of an extra-marital affair.” He also claimed to have video footage that hinted at the motive behind the murders.
Meanwhile, in a development later in the day yesterday, different journalist organisations at a joint meeting decided to take action against the ATN Bangla journalists who were involved in the attack.
In a statement, leaders of four journalist unions, Jatiya Press Club and Dhaka Reporters Unity said, "The organisations will take punitive measures against the attackers through proper procedure."
In the meantime, Za E Mamun, head of ATN Bangla news, said, "Some people using the names of journalist unions are trying to break the unity of journalists, and it is the duty of union leaders to find them out."
He was speaking at a hurriedly-called press conference at the TV station's Karwan Bazar office.
Mamun said, "There's no question of attacking anyone. Why would we attack?"
In a written statement, he said moments before the programme began, a person identifying himself as a journalist leader over the loudspeaker termed ATN Bangla newsmen killers and announced laying a siege to the ATN Bangla office.
Mamun said when one of his colleagues asked the speaker why he had made such comments, he became furious. "As soon as I went there with other journalists, some people suddenly attacked me and my colleagues.”
Mamun requested the journalist leaders to watch the video footage, identify the attackers and take action against them.