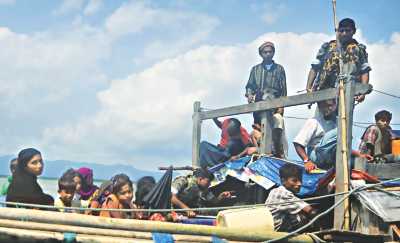 Bangladesh border and coast guards yesterday pushed back 11 boats carrying around 500 Myanmar nationals as they tried to enter Bangladesh through Cox's Bazar for refuge from sectarian violence in Rakhine state.
In the face of the deadly clashes between Muslims and Buddhists, the United Nations have also been evacuating their staff from its Maungdaw base in western Myanmar, reports AFP.
It evacuated the first batch of staff to the Myanmar capital on Sunday followed by the second batch on Monday, said Ashok Nigam, UN resident and humanitarian coordinator in Yangon.
The Myanmar government on Sunday declared a state of emergency in Rakhine to deal with the violence.
Meanwhile, the intruders, who were denied entrance to Bangladesh yesterday, were mostly of Muslim Rohingya families.
Out in the sea for the last few days, these panic-stricken people had very little food and water with them and were intensely unwilling to go back.
Members of Border Guard Bangladesh (BGB) intercepted three engine boats carrying at least 182 Myanmar nationals in the Naf River, about one kilometre from the BGB Shah Pori Dwip observatory post in Teknaf, around 7:30am and sent them back, said Maj Shafiqur Rahman, second-in-command of 42 battalion.
Most of the intruders were women and children, he added.
Failing to cross the border the three boats headed towards the St Martin's Island later when another boat with refuge seekers joined the fleet. But they faced resistance from the coast guards.
Station officer Lt Badroddoza of Bangladesh Coast Guard, Teknaf told The Daily Star that they had pushed back the four boats around 12:30pm.
“We came to know that the boats had landed in Nakhunda area of Myanmar,” he said.
Around 1:30pm, BGB men and coast guards chased away four more engine boats as they tried to intrude into Bangladesh crossing the Naf. Two of the boats carrying around 90 people were pushed back from near Shah Pori Island border.
The other two boats carrying 64 passengers managed to enter Bangladesh territory but were intercepted by BGB and coast guards near the Teknaf border.
BGB second-in-command Maj Shafiqur said the two boats were brought to Shah Pori jetty area and the passengers were provided with some bread, water and fuel in the face of requests from locals.
Mohammad Yusuf, 27, said miscreants had attacked their locality in Akiyab city Sunday afternoon and opened fire at the residents. He and his grandfather fled the house and got on a boat. They had been in the sea for the last two days with the hope that they would find shelter in Bangladesh.
Ailing mother Rehana Begum, 21, was so eager to get the BGB permission to stay here that in her approach she was paying no heed to her six-month-old hungry baby, who was crying for milk.
Approached, she burst into tears and said miscreants had burnt down their houses and been trying to kill them. She was desperate to stay away from the violence and avoid barbaric death.
Rashida Begum, 40, and Syeda Khatun, 42, of Jaliapara of Akiyab were found shocked and crying. They said Muslims were being tortured in their localities and they definitely did not want to go back then.
Around 3:30pm the Myanmar nationals were escorted out of the Bangladesh territory. But the air became heavy with their screaming for shelter and protection.
Three more engine boats carrying around 100 Rohingyas were intercepted by BGB at Gular Char of Shah Pori Dwip area around 10:00pm. These boats were too driven away from Bangladesh territory by border guards.
BGB Chittagong Sector Commander Col Golam Farooque Chowdhury, who visited Shah Pori Island yesterday, said they were keeping watch so that Myanmar nationals could not enter Bangladesh with the help of their relatives here.
He said security had been beefed up at nine BGB posts along the Teknaf border.
Maj Shafiqur said four additional platoons had been deployed along with 400 BGB men at the outposts for round-the-clock surveillance.
Human movement and trades between Bangladesh and Myanmar through Teknaf land port and Kaiukkhalia Transit Ghat had come to a halt since Friday, said Upazila Nirbahi Officer ANM Nazim Uddin.