Job creation for poor gets a boost 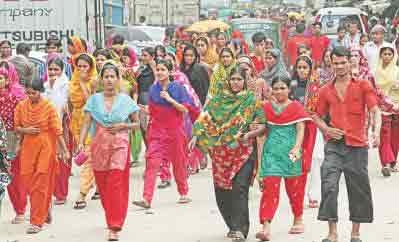 Self-employment for the hard-core poor gets a boost with the proposed allocation of Tk 1,200 crore in the budget, which is Tk 200 crore more than the current year's allocation.
This is a part of various government-funded schemes which aim to create an estimated 597.13 lakh man-months of employment, Finance Minister AMA Muhith said in his budget speech yesterday.
Man-month is the amount of work performed by an average worker during a month.
According to the government, currently 26 lakh people are unemployed with around 13.4 lakh people entering the job market each year.
Muhith said the government has taken initiatives for building skills of prospective employees, laid emphasis on agriculture, and expansion of small, medium and labour-intensive industries.
“The government targeted creating jobs of 597.13 lakh man-months, which is over 49 lakh man-years. This appears to be more than the number of the unemployed plus new entrants in the job market” said Dr Rushidan Islam Rahman, research director of Bangladesh Institute of Development Studies, told The Daily Star.
“The consistency of these numbers needs to be reviewed,” Rushidan said.
“Moreover, 20 percent of the labour force is underemployed, which is a bigger problem, but has not been addressed in the budget,” she added.
Prodip Kumar Biswas, chief executive of Online Knowledge Society, said that the self-employment schemes for the poor are similar to social security schemes and do not create sustainable employment.
“The government should provide interest-free loans to the educated youth to create entrepreneurs who in turn will create jobs,” Prodip said.