The Naveed Mahbub Show on ntv 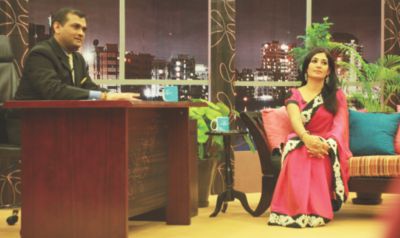 “Grameenphone Presents -- The Naveed Mahbub Show” goes on air tonight at 9pm on ntv. The weekly show will be hosted by comedian Naveed Mahbub.
The show follows the popular 'late night show' format pioneered by Johnny Carson on NBC several decades ago and is similar to the now popular “The Tonight Show with Jay Leno” (NBC) and “The Late Show with David Letterman (CBS)”.
Each episode consists of a monologue, where Naveed performs stand-up comedy on current issues. The second part of the show features light-hearted interviews with popular figures -- not necessarily just celebrities, but politicians, entrepreneurs, diplomats, trailblazers and so on. The show is unscripted and all audience responses are live and spontaneous -- nothing is 'punched in'.
The show is a first of its kind to air on any Bangladeshi channel. The fan page of the show is at www.FaceBook.com/TheNaveedMahbubShow
The guest on the first episode is Sharmin Lucky.