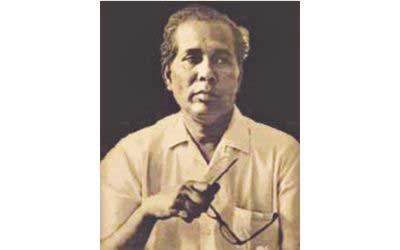 Yesterday marked the 36th death anniversary of Shilpacharya Zainul Abedin (1914-1976), the leading figure in the history of modern art movement in Bangladesh.
On the occasion of his death anniversary, the Faculty of Fine Arts (Dhaka University), Dhaka Art Centre, Gallery Chitrak and different cultural as well as social organisations placed wreaths at his grave on Dhaka University campus. Dhaka Art Centre and Drawing and Painting Department, FFA, DU organised discussions on Zainul Abedin as well. The speakers talked about his life, work and contribution to art and the society.
A well-known figure for his leadership qualities in organising artists and art movements, Abedin took the initiative to found the Government Institute of Arts and Crafts (now Faculty of Fine Arts) in 1948 on Dhaka University campus, of which he was the founding principal. This institute trained and nurtured an entire generation of artists whose works reflected the changing times. Qamrul Hassan, Safiuddin Ahmed, Shafiqul Amin, Anwarul Haq were contemporaries of Zainul Abedin. This was the generation that depicted the changing social reality in their art.
During the 1950s, Dhaka was a quiet and green city. Painters frequently visited Buriganga river, Waiz Ghat and other attractive places to portray nature with the guidance of their teachers. Zainul Abedin especially stressed on drawing and he successfully instilled in them an interest in this genre of art. The students also portrayed political chaos, economic crises, city life, rural life, still life and other themes. Some of them were greatly influenced by internationally acclaimed impressionist painters.
Born in Mymensingh, Abedin grew up in the serene landscape by the river Brahmaputra -- the river being a source of inspiration to the artist from an early childhood. In 1933, the artist enrolled at Calcutta Government Art School. Later he joined the faculty of the same institute after his graduation. He was an influential member of the Calcutta Group of progressive artists. A series of watercolours that Abedin did as his tribute to the Brahmaputra river earned him the Governor's Gold Medal in an all-India exhibition in 1938.
“Famine Sketches”, a series of paintings Abedin made in 1943, addressed the dearth of food created by the British Raj. Bengal was affected the most by the famine. That series earned Abedin international acclaim. Drawn in Chinese ink and brush on cheap packing paper, the series is a compilation of haunting images of intolerable cruelty and the utter helplessness of the masses dying of hunger.
Abedin is also famous for his landscapes, which mainly delve into scenic and panoramic beauty of rural Bengal. The works were mainly watercolours.
Abedin was involved in the Liberation War movement. He was in the forefront of the cultural movement to re-establish the Bengali identity.
In 1975, Zainul Abedin set up a folk museum at Sonargaon, and a permanent gallery in Mymensingh (Shilpacharya Zainul Abedin Sangrahashala) to display some of his works. He became actively involved in a movement to preserve the cultural heritage of Bengal. Abedin died in 1976 in Dhaka.