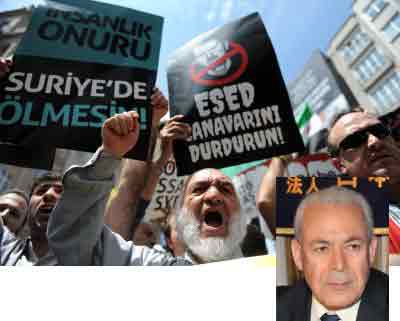 Demonstrators protest in front of the Syrian consulate in Istanbul yesterday against the regime of Syrian President Bashar al-Assad. Inset- Burhan GhaliounPhoto: AFP

Syrian opposition head Burhan Ghalioun called yesterday for a "battle of liberation" against the regime until the United Nations takes action under Chapter Seven which allows military intervention.
"I call on the Syrian people to lead a battle of liberation and dignity, relying on its own forces, on the rebels deployed across the country and the Free Syrian Army brigades and friends," he told a news conference in Istanbul.
Ghalioun, outgoing leader of the Syrian National Council (SNC), said such action would be taken "unless the international community assumes its responsibilities under Chapter Seven" of the UN charter.
A Chapter Seven resolution, which can be imposed by the UN Security Council, authorises foreign powers to take measures including military options.
Ghalioun, in a meeting earlier with Turkish Foreign Minister Ahmet Davutoglu, said the anti-regime uprising in Syria had reached a "turning point" after the killings on Friday and Saturday of more than 90 people in a central town.
"The SNC calls on the international community and in particular (UN-Arab League envoy) Kofi Annan to act immediately to halt the killings," an unnamed Turkish source quoted him as telling Davutoglu.
After an international outcry over what activists branded a massacre, the Syrian government yesterday denied its forces were responsible for the killing of at least 92 people, a third of them children, in the town of Houla.
Meanwhile, Syrian authorities blamed "terrorists" for the massacre, among the worst carnage in the 14-month-old uprising against President Bashar al-Assad, reports Reuters.
"Women, children and old men were shot dead. This is not the hallmark of the heroic Syrian army," Foreign Ministry spokesman Jihad Makdesi told reporters in Damascus.
"We categorically deny the responsibility of government forces for the massacre," Makdesi said.
He added that UN envoy Kofi Annan will be in Syria today.
EU foreign policy chief Catherine Ashton spoke of a "heinous act perpetrated by the Syrian regime against its own civilian population" in a statement yesterday. The head of the European parliament said it could amount to a war crime.
US Secretary of State Hillary Clinton demanded that those who carried out the killings be held to account.
France said it would call a meeting of the Friends of Syria, a group of Western and Arab countries keen to see Assad removed.
Britain said it would summon Syria's envoy over the massacre and that it would call for a meeting of the UN Security Council in coming days.
The United Arab Emirates requested an urgent meeting of the Arab League, whose head, Nabil Elaraby, urged the US Security Council to stop the killing.
But there was no immediate official word from Russia, which along with China has vetoed Council resolutions calling for tougher action.