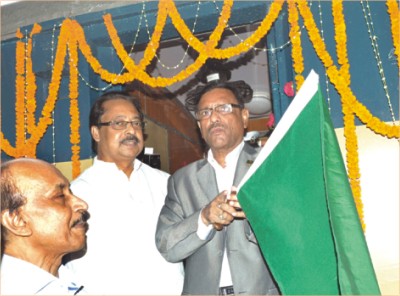 Bangladesh Railway yesterday introduced a new express train on the Dhaka-Sylhet route to meet the increasing demand of commuters.
The 12-coach Kalni Express with 562 seats will run six days a week. It will stop at Biman Bandar, Kulaura, Shayestaganj, and Srimangal stations on its way to Sylhet.
The train is scheduled to start shuttling at Kamalapur Railway Station at 3:00pm and reach Sylhet at 9:15pm. On its way back, it is to start at 6:40am and reach Dhaka at 1:00pm.
Communications Minister Obaidul Quader, who is also in-charge of the railways ministry, inaugurated the service at Kamalapur Railway Station.
Tickets for the Kalni Express have been on sale in Dhaka since Saturday, while sales started in Sylhet on Sunday.
With the launching of the new train, the Jayontika Express on Dhaka-Sylhet route will start at 12:00pm from the capital instead of 2:00pm. Both the trains will keep their services off on Friday.
Abu Taher, director general of Bangladesh Railway, told The Daily Star, "All the twelve coaches of the Kalni Express were renovated locally".
Earlier, the railway introduced one additional train each on Dhaka-Rangpur, Dhaka-Narayanganj and Dhaka-Joydevpur routes.
Railway Secretary Fazle Elahi, Additional Director General (operation) Mohammad Shahjahan, Additional Director General (infrastructure) Khalilur Rahman, and other senior railway officials were present at the inaugural ceremony.