Restrictions must be totally enforced 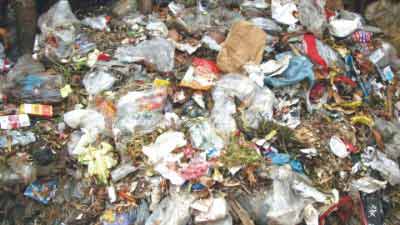 The use of polythene bags is increasing in Dhaka and elsewhere, despite the government's ban on the environmentally hazardous item, as most people and businesses have started to use it extensively again.
Even though the ban came in January 2002, the government could hardly find a competitive alternative for the people as well as the environment over the years.
The absolute ban was imposed on manufacture, import, marketing, sale, demonstration for sale, stock, distribution, commercial carriage or commercial use of the item.
In January 2010, the Department of Environment (DoE) allowed partially the use of polythene under certain conditions that three categories of polybags could be manufactured -- to transport fish fries, preserve mushrooms, and packaging of food items.
The conditions state that these polybags of certain measurement could not be used in local markets and businesses must take approval of the DoE before manufacturing them.
The initiative has failed to bring any significant change in the overall scenario thanks to the high price of alternative bags and packaging made of jute and paper, and the lack of frequent monitoring by the authorities.
Even though the use of jute packaging was made mandatory in 2010, its use is still insignificant due to the cost.
The extent of pollution in the city and at other parts of the country due to the dumped polythene bags and other non-biodegradable items apparently shows that the rules are not properly followed.
It draws concern as these polythene items are not usually decompose in earth, create obstacles in the flow of water in drains, canals and rivers. In addition, heavy smoke is created and spread in environment as the marginalised poor people burn plastic often as fuel to cook.
Not only for shopping bags and packaging purpose, polythene and plastic bags are widely used as sacks for rice, wheat, cement and fertiliser, too.
At present, the availability of plastic bags in the markets and shops has outnumbered those made of jute, paper and net as the cost of producing polybags is much less and profit is higher in comparison.
Alongside the dishonest businessmen, who basically tend to make profits, people do not seem interested in using alternatives to polybags considering the higher price of jute or paper bags.
Besides shopping, people are regularly gathering their daily waste in these polybags and handing over those to the cleaners. Meanwhile, the tendency of dumping such waste-filled bags here and there is clogging the drains and dangerously polluting waterbodies at different places.
Prospect of jute goods brightened up domestically after the government passed the law making use of jute compulsory for packaging products like grains, cement, fertiliser and sugar.
The law has already come into effect with the jute and textiles ministry asking public sector agencies to use jute instead of polythene for packaging seeds, fertiliser and foods.
But, the sellers at the grocery shops and kitchen markets usually provide polythene bags to carry products, while the wholesalers prefer polythene and synthetic sacks.
Officials at the DoE said only they cannot stop such a vast business when the people of all need to be made be aware of its adverse impact on health and environment.
“If they show their back to the polythene bags, the manufacturers would be discouraged and thus its production would come down,” said Quazi Sarwar Imtiaz Hashmi, DoE director (planning), who also leads drives against illegal polythene production and marketing.
“We launch regular drives against polythene despite our shortage in manpower,” he said.
The waste recycling industry, too, can help cut down pollution caused by polythene. The polythene-related items collected from the dumping stations, drains, waterbodies and streets can be used at the plants making plastic products or even in producing oil.
Meanwhile, the government could subsidise jute bags to reduce its price in a bid to encourage people.
Factories making polybags illegally are fined a maximum of Tk 50,000 while penalty for sale, marketing, stock of polybags is much less.
The DoE has only two magistrates for the whole country for different enforcement drives against polythene manufacturers, black smoke emitting vehicles and brickfields, industrial polluters and others.
This lack of necessary manpower, certainly, pulls down the number of DoE's mobile court operations against polythene when its use is on the rise. As per law, the DoE may employ up to seven magistrates.
According to chemical experts, the manufacturing process of apparently harmless polythene is unsafe and it takes centuries to decompose. The substances emitted during the production can cause cancer to factory workers and damage their kidneys, nervous and immune systems.
Most of the polythene manufacturing units are based in Old Dhaka.
Environmentalists say the penalty must be raised to put pressure on the dishonest businessmen who have resorted to manufacturing and marketing of illegal polythene bags due to the loopholes in monitoring.
Meanwhile, the law enforcers may also come forward against the illegal manufacturers of polybags and its marketing.
The government certainly bears the highest responsibility to curb use of polythene and plastic either by the help of stricter law enforcement or by promoting reasonable alternatives.

The writer is a journalist.