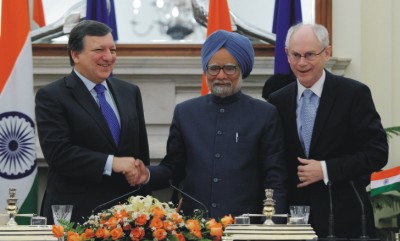 The EU on Friday pushed India to use its influence to get Iran to resume talks over its disputed nuclear drive, a day after New Delhi said it wanted to boost trade with the Islamic republic.
India, a major buyer of Iranian oil, has emerged as a potential spoiler as Western nations look to ratchet up pressure to force Tehran to abandon its atomic programme, which Iran insists is for peaceful purposes.
New Delhi on Thursday announced it would send a large business delegation to Tehran this month to exploit trade opportunities created by US and European sanctions.
Speaking at a news briefing for the EU-India summit in New Delhi, European Council President Herman Van Rompuy made no mention of India's trade plans, but expressed "deep concern" about Iran's nuclear ambitions which the West fears is aimed at building a nuclear bomb.
India, which has refused to join the Western sanctions, should "use their leverage to get Iran back to the negotiating table", he said.
Premier Manmohan Singh sidestepped Van Rompuy's call for action, but conceded "there are problems with Iran's nuclear program."
New Delhi had a great interest in ensuring "stability" in the Middle East region, Singh said, adding that "we sincerely believe that this issue can be and should be resolved by giving maximum scope to diplomacy."
Indian foreign policy experts have previously suggested New Delhi could act as an interlocutor with Iran to help the world community engage with Tehran.
India's business delegation plan comes as it examines ways to step up trade with Tehran amid trouble in settling its oil bills with the country due to the sanctions campaign, which is drying up banking routes.
Iran has reportedly agreed to accept Indian rupees for up to 45 percent of oil exports, while India sees opportunities to sell tea, wheat and rice, as well as iron and steel, among others.
"If Europe and the US want to stop exports to Iran, why should I (India) follow suit? Why shouldn't we tap that opportunity?" India's commerce secretary Rahul Khullar was quoted as saying on Thursday,
He described the planned delegation of government officials and business leaders as "huge," adding that India was bound only by United Nations sanctions on Iran, not embargoes imposed by other countries.