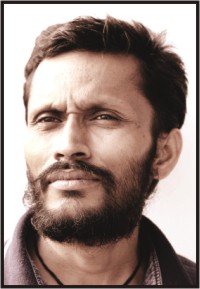 For those with an urge to make films, but cannot, due to fund constraint, digital format can open a new window of opportunity

Talented young TV play director Nurul Alam Atique is making a name for himself. Single episode TV plays and mega-serials directed by Atique such as Chithi and Labonyaprobha aired on ntv, Cycle-er Dana and Choturthamatra aired on BTV have won him plaudits. He has also worked as assistant director in films such as Ontorjatra. Moreover, Atique is a scriptwriter for TV plays and screenplay writer for cinema. He has received a National Award for writing the screenplay of the movie Kittonkhola (2000).
According to Atique, his early days in the cultural arena have not been easy. He had to struggle at each and every step. Atique started off as a part of the film society movement with an urge to be an independent filmmaker. In those days he edited several little magazines on cinema and literature. As he could find no financer or producer, Atique could not make his own movie. Eventually he enrolled in a Diploma Certificate Course on film direction at the Film and Television Institute of India. Just after completing his first year at the institution, Atique dropped out.
After returning home he began working as screenplay writer, researcher and assistant director with noted filmmakers like Tareque Masud, Abu Sayeed and others. He has also worked as a motion graphic designer and digital animator. Meanwhile Atique started writing the script for a TV serial titled Bandhan. Subsequently, he got an opportunity to direct a TV play. His innovative style as the director of the play Choturthamatra (aired in 2002) attracted attention of the viewers. There was no looking back after that. To quote him, “With every project, I want to create something new. I don't like repetition. I've noticed that other directors are following my treatments these days.”
Atique is currently contemplating his debut as a filmmaker. He wants to do something new in filmmaking as well. He is considering working in digital format. Atique says, “For those with an urge to make films, but cannot, due to fund constraint, digital format can open a new window of opportunity. Several directors are now quite experienced in presenting stories through digital format for the small screen viewers. And many of their works follow the 'language of cinema'. They should try to initiate a movement of digital cinema in Bangladesh.”
“Latest updates of DV, HDV, 4K cameras and projectors are easily available and the directors and technical hands are experienced in working with these equipments. And they are able to handle production and postproduction works smoothly. This is the perfect time for a boom. The production houses should come forward to their assistance. Subsequently, this can be a new opportunity for the showbiz entrepreneurs. Digital films screened at small theatres on a regular basis, can be a good source of entertainment for all.”