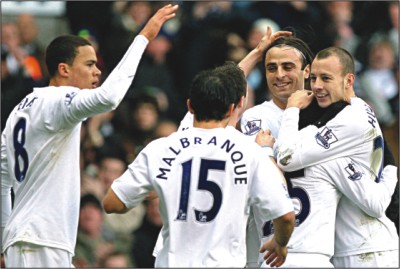 Tottenham striker Dimitar Berbatov (2nd from R) is congratulated by teammates after scoring against Manchester United in their Premiership match at White Hart Lane on Saturday.Photo: AFP

Sir Alex Ferguson insists Manchester United are still on track to retain their Premier League title despite being forced to produce a stoppage time equaliser to earn a point against revitalised Tottenahm.
The setback allowed Arsenal, 3-1 winners at Manchester City, to open up a two point lead at the top of the table.
But Ferguson insisted that gap will be closed if his side continue to display the spirit they demonstrated at White Hart Lane.
"Some people are saying we have dropped two points but that could be a massive point for us," the Scot said.
Dimitar Berbatov's first-half strike had looked set to give Spurs victory but United's late pressure paid off when, after a corner in the fourth minute of stoppage time, Carlos Tevez wrapped his leg round Spurs defender Michael Dawson to prod home an equaliser.
It was though a good day for Arsenal, who had ended Manchester City's unbeaten home record and also saw third-placed Chelsea held to a 1-1 draw at Portsmouth.
Berbatov put Tottenham ahead against United with a close-range finish in the 20th minute after Edwin van der Sar failed to hold Aaron Lennon's cross.
The United goalkeeper was then booked for angrily protesting to the officials over what he felt was a handball by Jermaine Jenas in the build-up, but television replays suggested the Dutchman was simply venting his frustration at what could prove to be a very costly error.
Ferguson said Tottenham deserved credit for a display that suggests Juande Ramos is beginning to have a major impact on the club.
"You're seeing an upswing with Tottenham, there's no question about that, Juande Ramos has done a fantastic job," said the Scot.
"But we've never stopped going and that's a great credit to the players. I think we deserved a point, but just."
Arsenal's win came courtesy of two goals from Emmanuel Adebayor and a fine finish from Eduardo da Silva, with Gelson Fernandes netting for City.
Arsenal boss Arsene Wenger acknowledged the outcome had been in the balance for long periods.
"It is hard here because they hadn't lost at home," he said. "It's their first defeat. It is always difficult when they have that belief they won't lose."
Jermain Defoe marked his debut for Portsmouth with a well-taken equaliser as Chelsea's nine-match winning streak came to an end with a 1-1 draw at Fratton Park, where Nicolas Anelka had given them the lead.
"Defoe's goal was offside, but that's history now," said disgruntled Chelsea boss Avram Grant. "We had enough chances to win the game."
Everton's bid to claim a place in next season's Champions League suffered a setback when they were held to a goalless draw at Blackburn.
But David Moyes's side remain in fourth place, a point ahead of Liverpool, who beat Sunderland 3-0 at Anfield.
A Peter Crouch header, Fernando Torres's 18th goal of the season and a late penalty from Steven Gerrard gave Rafael Benitez's side their first league win since December 26. "When your confidence is low it is important to win," acknowledged the Spaniard after what was a far from convincing display despite the scoreline.
At the bottom, Bolton took a significant step towards securing their Premiership status with an impressive 2-0 win away to fellow strugglers Reading, courtesy of goals either side of half-time from Kevin Nolan and Heidar Helguson.
Wigan also enjoyed their day. Kevin Kilbane headed Ryan Taylor's free-kick beyond Robert Green to give them a 1-0 win over West Ham which lifts them out of the relegation zone.
That move came at Birmingham's expense.
Alex McLeish's side slipped to third from bottom after a 1-1 draw at home to Derby. Sebastian Larsson had given Blues the lead with just over 20 minutes left but Argentinian striker Emmanuel Villa came off the bench to rescue a point for the bottom side.