Can we become the change agents? | The Daily Star
Skip to main content
বাংলা T

Can we become the change agents? 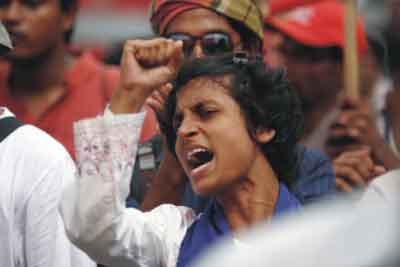 For many, life has become an epic struggle for survival. In exasperation they wonder: What does the future hold? How long will I have to endure this struggle?
The next obvious question is, "Who is to blame?" Fingers are quickly pointed at the easy targets: the politicians, the bureaucrats, the police, the mastaans, the business syndicates, and even control freaks beyond the country's borders. While there is some truth to these contentions, nagging questions remain: What empowers these groups to make life so miserable? To what extent have "we-the-people" created these strong and unsavoury coteries? Did we not have a hand in this, and in good measure?
Let's ponder the following: Stand in line anywhere and there's always someone cutting in. Often it is a person of some stature or means who seems to have this entitlement of being taken care of first. Unfortunately, nobody protests as these insensitive line-hoppers move up to the front, led by some officious and ingratiating character. The rest just gripe and burn up without voicing any complaint.
When the electricity, phone, or gas bills seem elevated we look for someone to "fix it" in return for a "generous" thank you. When our driver parks illegally, takes a wrongful turn or drives on the wrong side of the road, creating a massive jam, we bury our heads in a newspaper or pretend to be someone pompous who has this exclusive right to do wrong!
It is we who do not hesitate to ask for things we know we shouldn't be asking for; whether it is a job one is not qualified for, a job transfer that is not proper, an admission for a candidate who is not admissible, etc. ad nauseum.
Media reports expose other egregious acts of ours. When (fake) exams are available in the market, we-the-students rush to obtain them for a possible advantage. If we need a passport, we do not go through the usual procedure; instead we pay the touts who manage its delivery. When there is a hilsa ban, we buy this illegal catch. I will not even get into what we resort to when it involves "bigger" matters -- of position, privilege, property, taxes and the like.
Admittedly, the examples I use have a class bias. But many who belong to this class are those who can do something to bring change. Yet we don't. As long as things are going our way at a personal level, we don't seem to care how our actions affect others. Only when things go against us do we begin to lose our composure and play the blame game.
It takes two to tango. If one emboldens the other to do wrong while seeking an unlawful advantage, we instill and perpetuate those behaviours in society that we abhor. And the social pie becomes smaller.
By all that we think, aspire, intend, say and do -- positively or negatively -- we set in motion similar forces that replicate and multiply. If we-the-people are constantly ignoring what is good for society in exchange for personal advantage, should adversity not follow at a collective level? If we are not willing to make sacrifices, in great numbers, what incentive is there for those who play god with our lives to change? If we do not engage directly to change things for the better, who will?
There is yet another side to us, aptly portrayed by an avid writer: "We, as a nation, have come to accept the unacceptable, tolerate the intolerable and permit the despicable acts. This is the surest sign of degeneration and disintegration of a society 40 years after liberation and victory." The message is crisp: we have ceased to act on the basis of our conscience and consciousness, choosing to remain in the shadows for things to become right … somehow. What has so unnerved and enfeebled us in these 40 years that we bow to the weakest threat? Have we forgotten how our glorious liberation was achieved?
It is not unusual to hear the refrain that it is our leaders (at various tiers of society) who are at the root of all our problems. A book of wisdom offers deep insight into this matter: "It is as if the people's deeds appeared in the forms of their kings and leaders. If the people are upright, then their kings and rulers will be upright, and if they turn away (from uprightness), then their leaders will turn against them. And if they oppress and tyrannise, then their kings and rulers will tyrannise and oppress. And if deception and treachery becomes manifest amongst them, then the same will appear in their rulers." These words resonate with deep wisdom -- those who emerge to lead will bear the hallmarks of the ranks they represent. Thus, if the ranks want change, they must change!
Clearly, "we" must become the change agents where, according to a respected writer, each citizen assumes responsibility, individually and collectively to question authority… and demand accountability." Waiting in the backdrop for that elusive "other" to deliver the needed change will remain the saga of our unfulfilled dreams.