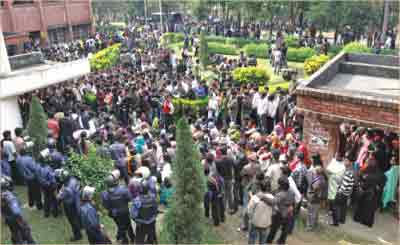 Over a thousand teachers and students mounted angry protests yesterday, staging processions across the campus and sit-ins on the premises of the vice-chancellor's office, after the killing of a student had sent shock waves through Jahangirnagar University.
In the face of their demand, the authorities expelled three students for life from the university for alleged involvement in beating dead Zubair Ahmed, a fourth-year student of JU English department.
But the demonstrators vowed to continue their agitation until the university met two others of their demands -- the sacking of JU Proctor Prof Arzu Miah and Chief Security Officer Azim Uddin for failing to ensure students' security on the campus.
Of the expelled trio, Khandaker Ashikul Islam and Khan Mohammad Rais are of zoology department and Rashedul Islam is from philosophy.
The decision came a day after the university authorities suspended the three for only a year, sparking outrage from teachers and students alike.
Zubair Ahmed, who reportedly belonged to the Shafin-Sammo faction of JU unit Bangladesh Chhatra League, succumbed to his injuries at a city hospital on Monday, 13 hours after being beaten allegedly by his rivals over previous enmity.
Shafin Ahmed, president of the suspended JU unit BCL committee, blames the Shamim-Sharif group for carrying out the killing. He claims the faction is patronised by VC Prof Shariff Enamul Kabir himself.
Shamim, a Chhatra League activist of Bangabandhu Sheikh Mujibur Rahman Hall of the university, has denied the allegation.
The vice-chancellor, talking to journalists at his office yesterday, said he did not back any BCL faction. He claimed that Zubair was not killed in any infighting of the Chhatra League, a pro-Awami League student body.
Prof Shariff also said he had taken the action against the three students, who are all in the fourth year, under the university's disciplinary code.
“We have already filed a murder case and one of the accused was arrested. If we find any others' involvement in this killing, we will include their names in the case,” he said.
Yesterday, Zubair Ahmed was buried in the Poura Graveyard at Madinabagh in Patuakhali at around 10:15am following a namaz-e-janaza attended by over a thousand people, including local political leaders and social workers.
Later, the mourners formed a human chain in front of Kalapara Press Club, demanding the arrest and punishment of the killers, our Patuakhali correspondent reports. Several hundred students of local educational institutions took part in the programme.
Earlier on Monday at 11:30pm, as the ambulance carrying the body from Dhaka Medical College morgue reached Zubair's Madinabagh residence, family members and relatives burst into tears and a pall of gloom descended on the locality.
Hasina Begum, mother of Zubair, is yet to understand who could have killed her son and why. "What was the fault of my son?” she asked, trying in vain to keep her emotions in check.
Zubair's father Tofael Ahmed, who has retired from the navy, said, "I want justice for the killing of my son."
He also urged the law enforcement agencies to arrest the killers immediately, and called upon the government to free the campuses across the country of all sorts of violence.
“GOOD CONNECTIONS”

Meanwhile, a Dhaka court yesterday placed Ashikul on a four-day remand after the investigation officer of the case, Sub-Inspector Shaheen Parvez of Ashulia Police Station, produced him before the court with a seven-day remand prayer.
Police arrested Ashikul from his room at Mir Mosharraf Hossain Hall of JU on Monday, hours before a murder case was filed against him, Rais, Rashedul and 10-12 unknown others with the police station.
Officer-in-Charge Badrul Alam told The Daily Star yesterday that the police have the names of six others whose connections with the incident are now being verified.
Additionally, a university committee investigating the murder said it had got names of some other students in connection with the killing.
The head of the probe team, Prof Farhad Hossain, also the JU pro-vice chancellor, while talking to The Daily Star yesterday, refused to disclose the identities of the new suspects.
He said the names would come to light when the probe report is published within the one-month deadline.
Zubair's elder brother Abdullah Al Mamun, a law teacher at Leading University in Sylhet, expressed his doubts whether the real culprits had been arrested.
He had heard that those involved in the killing had “good connections” with the university VC and proctor, Mamun said.
He also said he regarded the case filed by the university authorities with distrust and will include the names of the “real culprits” in the case if those are omitted.
THE AGITATION

Over a hundred teachers -- a section of Pro-Awami League teachers led by Prof MA Matin, left-leaning teachers and others from pro-BNP Nationalist Forum -- have expressed solidarity with the students demonstrating on the vice chancellor office premises, witnesses say.
As on the previous day, the protesters chanted slogans, demanding exemplary punishment for the murderers and resignation of all the members of the proctorial body, and formed human chains.
Teachers and students of the English department also joined the agitation and called upon the VC to ensure the safety of students and create a congenial atmosphere on the campus.
The BCL also brought out a separate procession that teachers and students alleged was aimed at diverting the attention of the demonstrators.