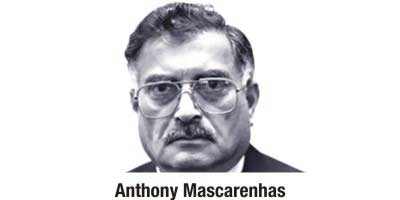 "How many did you get?" Major Rathore asked Major Iftikhar of the 12th Frontier Force Rifles of Pakistan army.
It was April 17, 1971. Rathore of the 9th Division was approaching Chandpur and met his friend Iftikhar.
Iftikhar smiled bashfully listening to the question and said, "Only twelve. And by God we were lucky to get them. We would have lost those, too, if I hadn't sent my men from the back."
The conversation was reported by Anthony Mascarenhas, former assistant editor of Morning News, Karachi, in his article "Genocide," published on June 13, 1971 in The Sunday Times.
Yesterday as Bangladesh celebrated the 40th anniversary of Victory Day the BBC ran a special story by Mark Dummett on Anthony's article.
The report "Bangladesh War: The article that changed the history", drew attention of The Daily Star.
In “Genocide”, Anthony, born July 10, 1928 in Goa and educated in Karachi, wrote about his experience during the ten-day tour to Bangladesh in 1971.
After driving all foreign journalists, Pakistan army arranged the tour for eight Pakistani journalists for spreading the propaganda that peace was returning to Bangladesh following military intervention.
All the invited journalists, except for Anthony, helped spread the propaganda as set by Pakistan military.
Anthony's writing has become one of the evidences of military atrocities during the Liberation War and the role of collaborators like Ghulam Azam, against whom the prosecution has placed 52 war crimes charges to the International Crimes Tribunal.
Major Iftikhar went on describing how after much searching in Hajiganj he had discovered twelve Hindus hiding in a house on the outskirts of the town.
He was one of several officers assigned to "kill and burn missions" across the East Pakistan. "Now Major Iftikhar was on the second part of his mission: burn," reports Anthony.
Mainly accompanied by Rathor, Anthony talked with a number of senior military and civil officers in Dhaka and Comilla during the tour and escaped to London from Pakistan to get his article published in The Sunday Times.
"We are determined to cleanse East Pakistan once and for all of the threat of secession, even if it means killing of two million people and ruling the pro­vince as a colony for 30 years," Anthony quoted senior military and civil officers in Dhaka and Comilla as saying.
"For six days as I travelled with the officers of the 9th Division headquarters at Comilla I witnessed at close quarters the extent of the killing. I saw Hindus, hunted from village to village and door to door, shot off-hand after a cursory "short-arm inspection" showed they were uncircumcised. I have heard the screams of men bludgeoned to death in the compound of the Circuit House (civil administrative headquarters) in Comilla.”
Anthony described how all the killing and arson were carried out in cold blood by the Pakistan military.
This was genocide conducted with amazing casualness, he wrote. "Sitting in the office of Major Agha, Martial Law Administrator of Comilla city, on the morning of' April 19, I saw the off-hand manner in which sentences were meted out.”
"On April 18 Chandpur was deserted. No people, no boats. Barely one per cent of the population had remained. The rest, particularly the Hindus who constituted nearly half the population, had fled," wrote Anthony.
The Sunday Times article also described how fake rallies were arranged in one incident by Lieutenant Javed of the 39 Baluch, who gave a bearded old man 20 minutes to gather a crowd and speak on camera asserting that military has saved Pakistan. The gathering was also asked to stage the scene of procession chanting slogans like "Pakistan Zindabad!"
"I think that in reality there is no contradiction in the Government's East Bengal policy. East Bengal is being colonized," he wrote after giving details how fast the 25,000 Pakistan military was brought to Bangladesh by Air with the determination to eliminate all enemy.
"This is not an arbitrary opinion of mine. The facts speak for themselves."
He also explained how Bangalee officers were also being weeded out of sensitive positions in the civil and foreign services. "All are currently being subjected to the most exhaustive screening."
The article said for several weeks president Yahiya Khan and Lt-Gen Tikka Khan had been trying to get support from East Pakistan collaborators.
“The support forthcoming so far has been from people like Moulvi Farid Ahmad, a Bengali lawyer in Dacca, Fazlul Quadeer Chaudhary and Professor Ghulam Azam, of the Jamat Islami, all of whom were soundly beaten in the General Elections last December.
“Bengalis look with scorn on the few who collaborate. Farid Ahmad and Fazlul Quadeer Chaudhury are painfully aware of this. Farid Ahmad makes a point of keeping his windows shuttered and only those who have been scrutinised and recognised through a peephole in the front door are allowed into the house.”
Major works of Anthony include The Rape of Bangladesh (1972) and Bangladesh: A Legacy of Blood (1986). He broke the news in 1979 that Pakistan has developed nuclear weapons.
This valiant journalist passed away in 1986.
In Bangladesh, of course, he is remembered more fondly, and his article is still displayed in the country's Liberation War Museum, says BBC.
"This was one of the most significant articles written on the war. It came out when our country was cut off, and helped inform the world of what was going on here," says Mofidul Huq, a trustee of the museum.
"His mother always told him to stand up and speak the truth and be counted," Anthony's widow, Yvonne Mascarenhas, recalled. "He used to tell me, put a mountain before me and I'll climb it. He was never daunted."