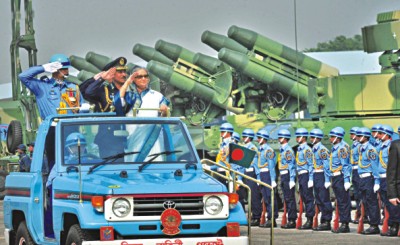 Prime Minister Sheikh Hasina yesterday asked members of the Bangladesh Air Force to remain always ready imbued with patriotism to safeguard the country's independence and sovereignty.
She gave the directive while addressing the induction ceremony of surface-to-air missile system and Bangabandhu Aeronautical Centre at Kurmitola Air Force Base in the morning.
The Chinese government extended cooperation in installing the system and setting up the centre.
The missile system of FM-90 category is a short-range air defence system (SRADS). This is an advanced all weather surface-to-air defence weapon which is capable of engaging targets flying at low or very low altitude. It has high skill probability and impressive
engagement capability at very low altitude. It has also very short reaction time.
The system can engage aircraft, helicopters, and precision-guided weapons including cruise missiles, technical air-to-ground missiles and anti-radiation missile.
The FM-90 weapon system is mainly used for the protection of key instalments, such as, airfield and aerodrome facilities, command control communication centres, bridges etc and it can also provide air defence for fielded force.
Addressing the function, the premier, who is also in charge of the defence ministry, said her government is working to build the Air Force as a modern, skilled and strong force in line with the Vision 2021.
Later, Hasina addressed the officers of the Air Force saying that there is no alternative to having an effective Air Force to protect the independence and sovereignty of the motherland.
She said one squadron F-7 BGI fighter planes and some other helicopters are going to be included in the arsenal of the Air Force. Besides, procurement of several transport aircraft is also under consideration of the government.
The prime minister said though Bangladesh Air Force would not be able to repair the damaged aircraft and helicopters, they can make light tools of aircraft at the aeronautical centre which would save huge amount of money.
She hoped that the centre would make prototype of light aircrafts by 2021. “I also hope that you would one day make aircraft, helicopters and radars in the country.”
Paying rich tributes to all the martyrs of 1971 Liberation War, including members of the Air Force, she said every member of the Air Force must know the real history of the emergence of Bangladesh under the leadership of Father of the Nation Bangabandhu Sheikh Mujibur Rahman.
“When you would know the real history, your confidence level would go up. Only a confident nation can achieve its all cherished development goals,” she said.
Earlier, on her arrival at the force's base, Air Force Base Air Vice-Marshal Shah Md Ziaur Rahman received her. A smartly turned out contingent of the Air Force gave her salute when she watched the missile parade. The force's pilots also welcomed the prime minister with a spectacular fly past.
Planning Minister Air Vice-Marshal (Retd) AK Khandker, Home Minister Sahara Khatun, Foreign Minister Dipu Moni, State Minister for Liberation War Affairs Captain (Retd) AB Tajul Islam, Advisers to the Prime Minister Maj Gen (Retd) Tarique Ahmed Siddique and HT Imam, and high military and government officials and foreign diplomats were present.