She asks govt to be firm on Tipai issue, takes a swipe at Ershad
Pankaj Karmakar and Quazi Amanullah from Khulna 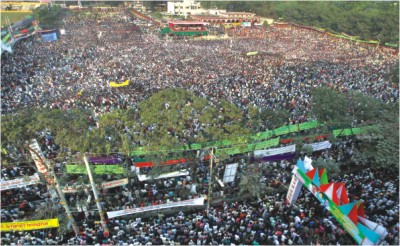 A section of the crowd that gathered yesterday on Khulna Circuit House ground to listen to BNP Chairperson Khaleda Zia, who is on her road march to the southwest. Photo: Amran Hossain

BNP Chairperson Khaleda Zia yesterday said the government had failed to sign the Teesta water sharing agreement with India owing to a lack of negotiating skills.
“If the government doesn't have the efficiency to bargain, nobody will give the country anything,” she said at a rally on Jessore Eidgah premises.
The former prime minister began a road march towards the south from the capital on Saturday to drum up public support for a reinstatement of the caretaker government system.
Urging the government to take a firm stance against India's move to build a hydroelectric project on Tipaimukh in the Indian state of Manipur, Khaleda said, "We're beside you [the government]. But if you cannot safeguard the interests of the people, quit.”
She slammed Indian companies for setting up phensidyl factories in the border areas "to destroy the country's youth", and said the Awami League government never protested anything.
"Rather, it is doing everything to turn Bangladesh into an Indian state," she said.
The Teesta deal was expected to be signed during Indian Prime Minister Manmohan Singh's Dhaka visit in September, but that did not happen. Many say it was due to last-minute opposition from Paschimbanga Chief Minister Mamata Banerjee, an ally of India's Congress-led government.
After her speech in Jessore, Khaleda led the road march towards Khulna.
Addressing a public rally on the Khulna Circuit House premises, she said her party would not accept the general election if it was not held under a caretaker government.
The system was scrapped through the Fifteenth Amendment to the constitution in June this year, providing for the incumbent administration to oversee general elections.
While the main opposition BNP threatens to boycott such elections, AL leaders, including its President Sheikh Hasina, who is also the prime minister, maintain that the next national polls will be held under the current government.
Terming the electronic voting machine a "machine of vote rigging", Khaleda Zia, a three-time prime minister, said the AL had introduced it to fulfil its agenda.
On the war crimes trial, she reiterated her demand for ensuring international standards, saying, “Such standards are impossible to be maintained because the process is being controlled by partisan people.”
She also demanded the immediate release of those detained on war crimes charges. “They should be punished only if they are convicted.”
Six individuals, including Jamaat-e-Islami chief Motiur Rahman Nizami, its Nayeb-e-Ameer Delawar Hossain Sayedee and BNP leader Salauddin Quader Chowdhury, are now detained on charges of war crimes committed during the 1971 Liberation War.
Criticising the AL for forging an alliance with Jatiya Party Chairman HM Ershad, Khaleda said, “It is not possible to advance democracy by joining hands with an autocrat like Ershad.”
Ershad killed not only democratic movement activist Dr Milon but also many others during his period in power, while the AL government has killed around 20,000 people in its current tenure, she claimed.
The government has created a deadlock in the administration by promoting unskilled officials while many skilled officials have been fired on political considerations, she said. She promised to reinstate them in service if voted to power.
The AL has already politicised the judiciary and the election commission, and the process of politicising the police and the army is on, she alleged.
Khaleda also said her party would bring down the prices of essentials if elected.
Responding to Sheikh Hasina's remark that the government was collecting the registration numbers of the private cars participating in the road march, the BNP chief said the government had become "insane at seeing the mass upsurge."
The government has failed to do any development work, she said, adding that the ministers are "worthless and corrupt".
The government has shut down almost all industries in Khulna, claimed Khaleda, promising to re-open them if voted back to office.
“The last caretaker government had pushed the country backward and the ruling Awami League government is pushing it even more backward," she said.