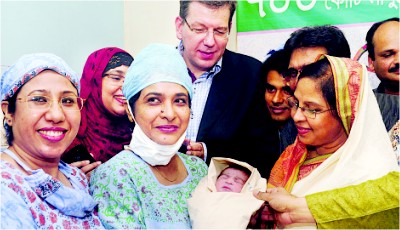 It was 12:01am today when the newborn cried out making her presence known to the world.
Her birth marks the day the global population hits seven billion.
Government officials and UN population agency UNFPA congratulated Mohsin Hossain and Tonny Hossain, the parents of the baby girl, who was named Oishee.
A cake was cut to celebrate her birth. Photojournalists took snaps of the lucky child at Azimpur Maternity Hospital in the capital.
The UNFPA gave Oishee a crest and her mother a sari.
“I am so happy. I have become the father of a baby girl at a historic moment,” said the newborn's father, Mohsin Hossain, a clothes trader in the capital. Oishee is their third child.
“We are welcoming and celebrating the birth of this baby,” Arther Erken, UNFPA representative in Bangladesh, told journalists at the hospital. But it does not happen all the time.
The world faces a number of challenges with a boom in population. Highly populated countries like Bangladesh face even more challenges, said the UNFPA official.
“It is because agricultural land is declining by 1 percent each year. Can we feed them, provide them quality education? Can Bangladesh create 2 million jobs per year?” asked Erken, noting that Bangladesh's population now stands at 15.05 crore.
Meher Afroz Chumki, chairman of the parliamentary standing committee on women and children affairs ministry, said the birth of every child must be welcomed. Unfortunately, it does not happen in every case.