Music in his Blood 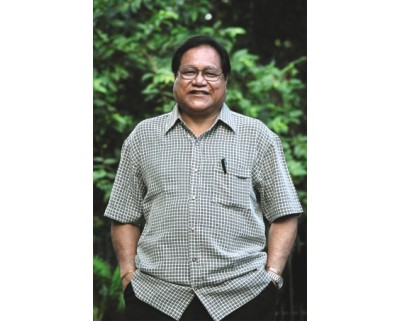 Rathindranath Roy was one of the most prominent performers of the Shadhin Bangla Betar Kendra (SBBK). Roy joined SBBK in May during the Liberation War. Reminiscing on those days, he says, “There were very few facilities at the radio station located at 57/8, Ballygunge Circular Road, Calcutta (now Kolkata). Revealing the address to anyone was strictly prohibited at that time due to security concerns. It was quite challenging for the staff to carry out their work. We had our dining hall downstairs and the studio was not even soundproof. It was a one-channel machine with which we used to do all the recordings. Samar Das was the chief music director and producer of SBBK.
“The day I joined SBBK, Apel Mahmud, whom I endearingly called 'Mamu' (uncle), told me that he had composed a song and I had to sing it. That song -- 'Teer Hara Ei Dheu-er Shagor Pari Debo Rey', written by Gobinda Haldar -- was my first performance on air for SBBK.”
Roy cited the inspirational songs that he sang at SBBK: “Amar Desh Shob Manusher”, “Purbo Digantey Shurjo Uthechhey”, “Nongor Tolo Tolo” (composed by Samar Das), “Tara E Desh-er Shobuj Dhan-er Shishey” (written by Dr. Moniruzzaman and composed by Samar Das), “Poraner Bondhu Rey Bolbo Ki Torey”, “Rokto Diye Naam Likhechhi” (composed by Shujeo Shyam), “Bhebo Na Go Ma Tomar Chhelera Hariye Giyechhe Poth-e” (duet with Manna Haque), “Hey Mohamanob Ekbar Esho Phirey” (duet with Ajit Roy) and many more.
He also sang some Rabindra Sangeet, such as “O Amar Desh-er Mati” (duet with Ajit Roy), and Nazrul Sangeet, including “O Bhai Khati Shonar Cheye Khati Amar Desh-erMati”, which motivated freedom fighters during the Liberation War. In Roy's view there are few parallels to these patriotic songs. In his words, “The spirit, the situation and the passion cannot be conveyed through words. Think about these songs rendered during the Liberation War. Nothing compares to them.”
Roy has also done his bit to promote folk genres, especially Bhawaiya songs that are popular in the Rangpur area. The emotion, rhythm and pulse that Roy implies in rendering the numbers -- “Phandey Poria Boga Kandey Rey”, “O Ki Garial Bhai”, “Oh Ki O Bondhu Kajol Bhromora Rey” and many other traditional Bhawaiya songs of ox-cart drivers and cowherds are mesmerising.
Questioned on the source of that inspiration, Roy said, “I face this question when I visit Paschim Banga (formerly West Bengal). They say that my rendition effortlessly hits the heart. Actually, Bhawaiya is a folk genre that melodically articulates the laments of a melancholic woman. This theme is present in almost all Bhawaiya songs. An artiste's rendition zooms in on that pain in the heart. Abbasuddin Ahmed is considered a legend in Bhawaiya as he popularised the genre among urbanites. What my father rendered was the raw form of Bhawaiya.
“This is true of not only Bhawaiya. Music is the soulful flow of melody from the heart. It needs to emerge from the core of one's soul. If my soul doesn't cry, I can never make your soul cry. When I perform, I try to create an artistic detachment in me. It happens naturally.”
In 2002, Roy founded the Bhawaiya Academy in Rangpur. Now the institution has branches in Gaibandha, Kurigram and Lalmonirhat. Roy also has plans to launch a research-oriented publication on Bhawaiya music.
Roy performs not only Bhawaiya but also other folk genres such as Bhajan, Kirtan, Ram Proshadi, Shyama Sangeet, Bhatiali, Murshidi, Marfati, Lalon Geeti and Sylheti.
According to Roy, folk music is deeply embedded in Bangladeshi culture. To quote him, “These songs are our roots, our true heritage. As long as the villages in Bangladesh exist, there will be folk music.”
He has also been a playback singer and was honoured with the National Film Award in 1979 for the song, “Tumi Aar Ekbar Ashiya Jao Morey Kandaiya” (film: “Nagordola”) and in 1981 for the song, “O Jar Ontorey Bahirey Kono Tophat Nai” (film: “Ondho Bodhu”). The artiste was conferred with the Ekushey Padak in 1994 and the Popular Folk Song Award at the World Youth Festival in the then East Germany in 1973.
Roy has performed in a good number of countries, including USA, UK, France, Germany, Australia, Canada, Japan, Singapore and former Soviet Union (as a member of a state delegation led by Kalim Sharafi).
Roy has been married to Sondhya Roy, a singer. They have two sons and a daughter, Chandra Roy, who is a singer as well. Currently, Roy is living with his family in New York, USA.
Roy still regrets that the contributions of cultural activists during the Liberation War have not been given their due. According to the artiste, “Cultural contribution in 1971 deserves proper evaluation and artistes who had inspired the nation in its troubled times should be honoured accordingly.”