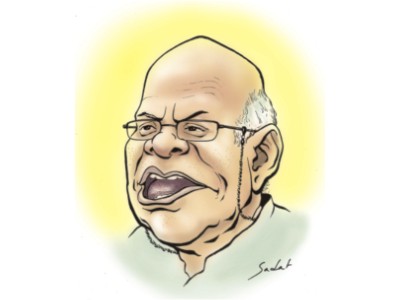 Finance Minister AMA Muhith has clarified that Nobel Laureate Prof Muhammad Yunus has not been involved in any campaign to stop foreign aid to Bangladesh.
“There is a propaganda that Dr Yunus has campaigned so that Bangladesh does not get foreign aid. I did not notice such a thing….I have no proof of it,” Muhith told Nicholas Dean, US charge d'affaires in Dhaka, during a two-hour meeting at his secretariat office yesterday.
The finance minister was briefing reporters after the meeting with the US diplomat.
The two discussed different issues including Trade and Investment Framework Agreement (TIFA) and matters involving Dr Yunus and Grameen Bank.
Without mentioning any name, Prime Minister Sheikh Hasina on Thursday told a meeting of Awami League parliamentary party that a Bangladeshi Nobel laureate had lobbied against World Bank's funding for the Padma bridge project.
When asked about the matter, Muhith said, “I have no comment on it.”
The finance minister told reporters that credit rating agency Moody asked him whether foreign aid to Bangladesh declines because of the problems between the government and Prof Yunus.
Muhith said Dr Yunus had not created any obstacles for Bangladesh to getting foreign assistance.
Giving an example, he said foreign aid to the tune of $5.1 billion from development partners had been negotiated in fiscal 2010-11, and the government signed an agreement with the World Bank for $3.1 billion of that amount. “This is the highest ever in the history of Bangladesh.”
Muhith said the WB has also committed to provide Bangladesh with $6.1 billion aid in the future.
Muhith said he told the US charge d'affaires that Grameen Bank is now run by an acting managing director. The microfinance organisation is likely to get a new managing director in three months and a committee is working to that end.
The finance minister said Dr Yunus used to receive salary and allowances according to government rules. But the government has to pay the new managing director in line with market practice.
Muhith said Dr Yunus has left a good example of a highly decentralised system in Grameen Bank. The staff in regional offices do not need to come to the bank's headquarters for running their offices. They do not face any fund problem, as the Bank is run on its own money.
The minister said the Grameen Bank now has only one problem -- the disconnect between the bank and its associate organisations. The government has been sincere about solving the problem, he said.
According to Grameen Bank Ordinance, the bank will work in rural areas, and a poor person having a half bigha or less land will qualify for microcredit from the bank.
It is an “organisation for the rural poor. It has no right to do anything else,” he said.
But it has been observed that Grameen Bank got involved in many other activities. Prof Yunus has created 54 organisations with seed money from the Grameen Kalyan Fund and other sources. Many of these companies are registered abroad.
The minister said the government has been thinking over the ways to link these 54 companies with the GB.
The government asked the IFC, a sister concern of the World Bank, to recommend a way to link these subsidiary organisations with Grameen Bank. But the IFC refused the government proposal, since it had already invested in the subsidiary companies. It cannot do the job as a party to these companies.
The minister said the government now considers giving the job to a chartered accounting firm that will recommend ways to restructure the 54 organisations.
Replying to a question on the Padma bridge project, Muhith said the World Bank had delayed many other projects in the past.
The WB suspended funding for a power plant in Siddhirganj for two years. There was a similar suspension in case of the Jamuna bridge.
Muhith hoped that the snags in the Padma bridge project will be solved soon.
“We have given a proposal to the Bank, and are waiting for their response.”
Asked what the government will do if the WB turns down the proposal, the minister said, “We have other ways. We won't tell you everything.”
The finance minister said a US team will arrive in Dhaka soon to finalise the TIFA.