Port infrastructure not yet ready for handling goods
M Abul Kalam Azad, back from Brahmanbaria 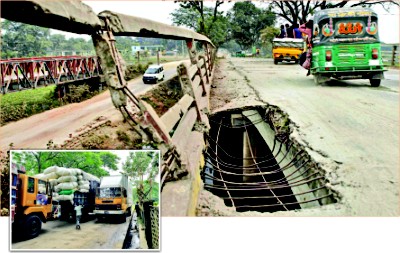 A dangerous gaping hole on Ramrail Bridge in Brahmanbaria. Railings of the bridge are coming apart. This stretch of road is an integral part of a transit route for India. Infrastructure has not been developed, but transit is on. Inset, this road at Akhaura is too narrow for large vehicles. Photo: Rashed Shumon

Poor infrastructure, inadequate logistics and manpower in Ashuganj and Akhaura ports are severely hampering the handling of transit consignments bound for India.
About 20km of the 47-kilometre Ashuganj-Akhaura road is narrow and potholed, while some bridges and culverts along the way are in a sorry state.
Ashuganj River Port has yet to have a permanent jetty and a container terminal. A makeshift jetty built with sacks of concrete and sand last year is now handling transit goods and over dimensional cargoes (ODC)--freights that are beyond the normal size of standard containers.
During a visit to the port recently, The Daily Star found no permanent customs and BIWTA offices. Customs officials hardly attend to their duties at the temporary office on the first floor of Chisti Filling Station at Ashuganj bazar.
“The river port remains on paper only, as it has no functioning infrastructure,” said Firuz Sikder, vice-president of Ashuganj Upazila Chamber of Commerce and Industry.
He thought the temporary jetty is very risky as it is often threatened by high tides. “The now-shut Ashuganj Fertiliser Factory can be of huge benefit for us if its jetty is made usable again. We have written to the BSCIC so we can use it.”
The half-kilometre dirt road from the jetty to Ashuganj bazar is also in a miserable state.
Transport owners and businessmen at Ashuganj underscored developing the river port to a full-fledged one to boost transit trade.
The government has taken an initiative to build a new port with Tk 245 crore Indian credit. It will be set up on 32 acres of land near the present port to the south of the Meghna. The authorities are yet to acquire the required land.
“The Planning Commission has endorsed a project in this regard. We have sent the project documents to India for approval,” said Shah Alam Khan, a member of National Board of Revenue.
Akhaura Land Port, which was inaugurated in August last year, is now struggling to handle the extra load of ODC and transit goods. Several hundred lorries always remain stranded on the roads due to lack of space at the port yard.
The normal activities at the port are being hampered as the authorities are giving priority to handling the transit and ODC consignments.
The port can accommodate about 100 trucks, Superintendent of the Port Hamidur Rahman told The Daily Star. “Although the port yard is being expanded under a project, there is no shed or weighbridge here.”
Of the total 19 bridges and culverts on Ashuganj-Agartala road, several including the Ramrail bridge are in poor state. A bailey bridge has been installed there which has also become risky. All the vehicles carrying transit goods are now using a diversion road.
The condition of 11 km of the transit route -- Ashuganj to Sarail Biswa Road -- is good as it is part of Dhaka-Sylhet highway. But around 20 km road from Sarail to Brahmanbaria is dilapidated.
“We have taken a project worth Tk 235 crore to develop the 20 km road with bridges and culverts,” said Jahangir Alam, executive engineer of Roads and Highways Department in Brahmanbaria.
Tender will be floated soon for the project after getting clearance from the communications ministry, he added.
The road from Sultanpur to Akhaura port is now being developed with Tk 28 crore from Indian fund.
When trial transit began last month, the communications ministry wrote to Brahmanbaria RHD office for their comments on the condition of roads and bridges.
“We will soon send a reply to say that the existing facilities are not enough for transporting transit goods and ODC,” said RHD official Jahangir.
Officials concerned said development of Ashuganj River Port and the road up to Akhaura Land Port will take three to five years if the work starts immediately.