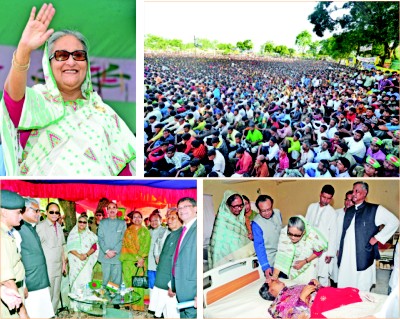 (Clockwise) Prime Minister Sheikh Hasina waves at people as she arrives to address a public meeting at Patgram Government College ground yesterday. The premier talks to a patient after inaugurating the 10-bed Dahagram Hospital. Hasina and her entourage with Indian officials at Dahagram Union Parishad complex. Photo: PMO

Her father had signed an agreement with India providing for freedom of movement for the people living in Dahagram-Angorpota enclaves in Lalmonirhat. But the Father of the Nation's move did not secure a positive response from India at the time.
Around four decades after Bangabandhu Sheikh Mujibur Rahman signed the agreement in 1974, Prime Minister Sheikh Hasina yesterday flew to the enclaves to partake of the inhabitants' joy over the freedom they would now enjoy.
The people inhabiting the two enclaves had been denied the right to free movement for almost 45 years because of the Indian authorities' restriction on the use of Tin Bigha corridor.
But history then took a new turn, on September 8 this year, when the Indian authorities let the iron gates stay open following a deal between Hasina and Indian Prime Minister Manmohan Singh.
Forty-three days after the signing of the deal, Hasina became Bangladesh's first head of government to be present at the historic Tin Bigha corridor. She held a brief meeting with two Indian ministers there.
Accompanied by a number of ministers, advisers, lawmakers and journalists, Hasina opted to use the corridor to return to mainland Bangladesh from the Dahagram-Angorpota enclaves.
Her motorcade reached the corridor area around 12:45 pm. Two Indian ministers--Health Minister Golam Nabi Azad and Minister of State for Home Affairs Jitendra Prasad Singh--along with some other government officials received the Bangladeshi leader with a red carpet welcome at the corridor. They held a meeting for half an hour, followed by refreshments.
The Tin Bigha corridor area had acquired a new look, with all the festoons and the flags of Bangladesh and India giving it a brilliance it had never known before. To welcome Hasina, the students of BSF Senior Secondary Residential School, flags of both countries in their hands, stood in patience and in good cheer.
After the meeting, the Indian health minister told journalists that he and his colleague had come there to exchange greetings with Hasina and to celebrate the historic occasion.
An upbeat Sheikh Hasina spoke for the country. “It's a glowing example of better relations with India,” she stated.
Apparently moved by the joy expressed by the inhabitants of the two enclaves, Hasina later in her speech at a public rally at Patgram narrated her government's efforts to resolve the long-standing enclave problem.
“It's an achievement of our government,” Hasina said, referring to the rule of keeping open the Indian iron gates at the Tin Bigha corridor for 24 hours. She also recalled her father's move in 1974 to ensure the use of the Tin Bigha corridor for the people of the two enclaves.
The enclaves issue between India and Bangladesh is the result of the work of the Boundary Commission headed by Sir Cyril Radcliffe in 1947, the year when the subcontinent was partitioned into India and Pakistan. The problem persisted, for close to a quarter of a century. It was not until the liberation of Bangladesh in 1971 that optimism regarding a solution to the problem came to be generated.
Indira Gandhi and Sheikh Mujibur Rahman, prime ministers of India and Bangladesh, signed an agreement aimed at putting into effect the demarcation of boundaries at selected stretches of territory on May 16, 1974. Under the terms of the treaty, India was supposed to lease in perpetuity to Bangladesh an area of 178x85 square metres near the Tin Bigha corridor to connect Dahagram to Panbari of Patgram in Bangladesh.
But the handing over of the land was delayed due to prolonged constitutional and legal debate in India. This situation continued till October 7, 1982, when another agreement was signed. But that too failed to resolve the problem. It would take another decade for the agreement to materialise and give the people of the enclaves some opportunity of movement.
On June 26, 1992, the people of the enclaves were able move through the corridor for six hours a day till June 1996. They were allowed to use the corridor constantly for 12 hours a day between July 1996 and September 2011.
“I had dreamt for a long time of getting free of my confined life. And I wanted to die as a free human being,” Momtaz Ali, 65, of Bongerbari, Dahagram enclave, told The Daily Star yesterday.
“People of the mainland did not want to get married to our sons and daughters as we were confined to the enclaves. Now we can easily build relationships with people living on the mainland,” he said.
His son Hashmat Ali, 38, said he could not continue with his education owing to the confinement. He looks to the future. “I will educate my children as we are now free.”
Talking to The Daily Star at Dahagram High School ground, HM Ershad, in power in Bangladesh for nine years between 1982 and 1990, said he had flown to the enclaves thrice when he was president with permission from the Indian government for use of their airspace. “People of the enclaves now have got a new life. They have come by freedom,” Ershad said.
Ershad flew to Dahagram with Hasina in the morning where some thousands of people eagerly waited for the historic moment to be set off.
Sheikh Hasina spoke briefly before the crowd, assured the enclave inhabitants that her government would take some measures to improve the quality of their lives. And that would come through implementing new projects in the 18.68 square km area where 16,000 people have their homes.