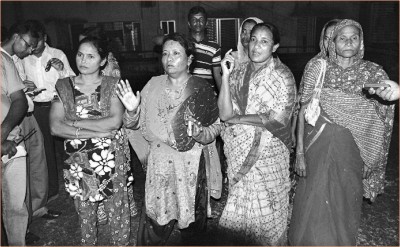 Grameen Bank directors speak to the media last night after they were allegedly harassed by some former employees of the microcredit organisation and plainclothes policemen in Mirpur. Photo: STAR

Seven board members of Grameen Bank, who travelled to Dhaka to meet with the well-wishers of the microcredit organisation, were harassed by their former colleagues and security officials yesterday.
A section of former Grameen Bank officials and security personnel quizzed them about their tour and the reason for travels to the capital, said the board members. They even asked the directors whether Grameen Bank founder Prof Muhammad Yunus paid them to talk in his favour.
At one stage, they even tried to brand the directors as members of outlawed Jama'atul Mujahideen Bangladesh.
Board members including Rozina Begum, Rahima Begum, Majida Begum, Sundori Akhter, Nasima Begum and Anwara Begum came to the capital on Saturday afternoon to join a discussion with a group of Grameen well-wishers.
Rights activist Shirin Haque who organised the meeting said the purpose of the discussion was to update the friends of Grameen on what is happening in the organisation.
But the meeting was not held yesterday and the directors went sightseeing at noon. When a microbus carrying them reached Dhanmondi, they found out that they were being trailed by a group of people on motorbikes, said Shirin.
One of the board members said the bikers also filmed them, prompting them to return to their place of stay in Mirpur.
Later in the day, the situation became panicky.
“There was a power outage in the evening and we went to the rooftop of our building. When we wanted to get back into our rooms, we found that someone locked the door on the rooftop from outside,” said a board member.
Minutes later, the door was unlocked, but it was not clear who locked and unlocked it. The board members saw some policemen and a group of other people, who identified themselves as former Grameen employees outside the building, the board member said.
“The so-called former employees of Grameen Bank misbehaved and used abusive language with us,” alleged Majida Begum, a Grameen director.
“Police treated us as if we were thieves,” said another board member.
The board members were also grilled by some other people who introduced themselves as journalists.
Police told the board members that they had been informed that several JMB members were captured in that building.
But Deputy Commissioner of Detective Branch (North) Mahbubur Rahman denied conducting any drive there to arrest any JMB member.
Abdul Malek, officer-in-charge of Darussalam Police Station, said: “We heard that a group of Grameen Bank officials had gathered for a meeting. We went there to give them protection, not to make any arrest.”
When rights activist Shirin Haque, Gonoshasthaya Kendra Founder Dr Zafrullah Chowdhury, and lawyer Sara Hossain reached the scene, the former Grameen officials left the place in a hurry.
Shirin said police were supposed to protect them, instead they harassed the board members accused them of wrongdoing.