<i>Shopping goes on amid life risk </i> 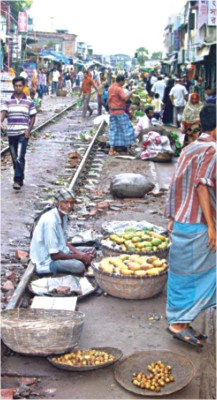 Makeshift kitchen market on rail tracks at Daulatpur in Khulna city goes on amid risk of serious accident anytime.Photo: STAR

About a kilometre area of the rail line at Daulatpur in Khulna city has been serving as a makeshift kitchen market for years, thanks to the callousness of a section of people and indifference of the authorities concerned.
Vendors and buyers of the unauthorised market are exposed to serious accidents as ten inter-city trains and goods carrying wagons daily ply this route on an average for movement from Khulna to Rajshahi and other places.
Several accidents took place in the past, still they do not move to a safer place until the running train reaches a stone's throw.
Customers crowd there every morning to buy rice, fishes, vegetables and other daily necessities from the movable shops set on or beside the rail line at Daulatpur.
The number of buyers rises again after sunset when service holders, both men and women, go there for shopping.
Most of the customers are women who are often found gossiping sitting on the rail line.
Many women go there with their children who often move hither and thither on rail line when their mothers remain busy in buying things.
"We buy daily essentials mainly vegetables and fishes from makeshift shops at this rail line market as prices are cheaper here," said Humaira Yasmin, a housewife residing at Pabla under Daulatur police station.
Rice trader Mozammel Hossain said that their demand for a separate KCC-Run kitchen market at Daulatpur has remained unmet for long.
A group of ruling party men back most of these unauthorised makeshift shop owners of 'rail line market' in exchange of some benefits, making it tough for Khulna rail authorities to evict these squatters, said Afsar Ali Morol, president of Daulatpur Bazar Unnayan Sangstha.
KCC Panel Mayor-1 Ajmol Ahmed Tapon who is holding temporary charge as mayor, said that a separate kitchen market would be set up at Daulatpur during the current financial year.
When contacted, Khulna Railway Stationmaster Golam Mostafa said it is duty of the estate officer to look into the matter relating to encroachment on rail line or rail property.
The Land Surveyor of the Estate Department of Khulna Railway Mizanur Rahman, who also works as the supervising officer, said, "During the last two years, I launched eleven drives to evict the encroachers. But they again sit there a few hours after the eviction drive."