When glory was only 300 metres away 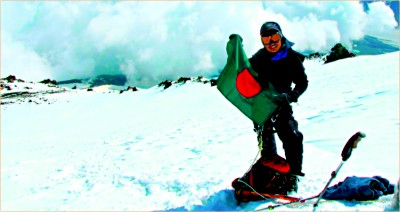 Wasfia Nazreen holds a flag of Bangladesh on Mount Elbrus situated on the borders of South West Russia and Georgia. She is the first Bangladeshi attempting to climb the seven highest mountains of the world's seven continents. Photo: Courtesy

Wasfia Nazreen, the first Bangladeshi attempting to climb the seven highest mountains of the world's seven continents, returned home yesterday after attempting to climb Mount Elbrus situated on the borders of South West Russia and Georgia.
Wasfia and her team were 300 metres from the mountain's peak (at 5,642) on July 12 when severe weather conditions, deadline to descent by mid-day and visa limitations forced her to leave the area.
She is the first Bangladeshi to have climbed the central Caucasus mountain range and Mount Elbrus, confirmed Russian authorities.
Wasifa left Dhaka on July 3 for her first attempt at the seven peaks beginning with Mount Elbrus, the highest point of Europe.
The regular climbing southern route to Mount Elbrus was shut due to conflicts of national interest, forcing her team to shift the climb to the northern side, a more dangerous and unexplored terrain.
She will, however, return to Mount Elbrus when weather and visa permit, says a press release of Bangladesh on Seven Summits, a campaign supported by Liberation War Museum in celebration of 40 years of Bangladesh's independence.
In a satellite message, she said, “Remembering all the martyrs of 1971, we call upon the youth of our motherland to take the country forward in the best way each of us can serve.
“It is high time Bangladesh be recognised in the world podium for all the beauty she is…….Bangladesh aaro egiye choluk.”