Unelected people must not come to power again 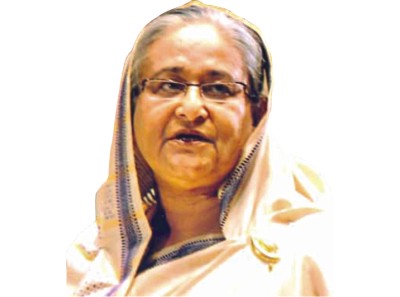 In a speech scathing about the caretaker government system, Prime Minister Sheikh Hasina yesterday said unelected people will never be given the opportunity again to assume power and destroy democracy.
She, however, urged opposition leader Khaleda Zia to return to parliament and say whatever she has to say on the caretaker government issue.
Participating in the budget discussion in the House, the prime minister also described what she said were the political parties' bitter experiences during the tenure of caretaker governments since the system's introduction in 1996.
The PM's statement came when the much-talked-about constitution amendment bill proposing some major changes including scrapping of the provisions for caretaker government system was finalised after scrutiny by the parliamentary standing committee on the law ministry.
She said though her party has a three-fourths majority in parliament, it would consider the opposition's “fair suggestions” even if they come after passage of the constitutional amendment bill.
Hasina said, “The elected representatives will do whatever is required. We will not allow others to interfere.
“We want people's power to remain in people's hands. Parliament will decide what to do [to resolve the caretaker government dispute].”
Referring to the Supreme Court verdict that declared the caretaker government system illegal but observed that the next two parliamentary elections could be held under the system, the prime minister said parliament will decide about it.
“For this, discussion is required. But the opposition did not join the discussion on constitutional amendment in last 11 months.”
She called upon BNP chief Khaleda not to be influenced by others while taking stance on the caretaker government system.
Hasina said that during the last caretaker government rule the army had offered her status and facilities of a prime minister on condition that she did not participate in the election. “But I refused, as I don't do such politics.”
Blasting BNP for its opposition to allowing whitening black money, she said former prime minister Khaleda, her two sons, her finance minister and many other ministers and their sons had whitened black money. “Now it should be enquired how much black money they have whitened.”
The Awami League chief slammed pro-BNP lawyers for their agitation against Khaleda's younger son Arafat Rahman Koko's conviction in a money-laundering case.
That Khaleda's son had taken bribe and laundered money were proved by the US Federal Bureau of Investigation and Singapore government, she continued.
Koko was sentenced to six years in jail as per the law of the country. “You [Khaleda] have taught your sons how to steal and commit crime. The state bore their educational expenses but all they learnt was how to commit crime.”
On the proposed budget, the prime minister said, “It is not ambitious at all. We will be able to implement it.”
The House leader's hour-long speech was punctuated by desk-thumping from the treasury bench.