All she wants is punishment 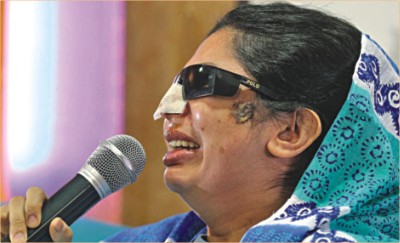 After doctors in Bangladesh and India have failed to restore Rumana Manzur's eyesight, the Dhaka University teacher now has just one option open: waiting for a miracle.
“I don't know what will happen with my eyes. Now everything depends on Allah,” a crying Rumana said yesterday.
She was talking to journalists at capital's LabAid Hospital, where she was readmitted on Monday after her return from India. She demanded punishment of her assaulter husband Hasan Sayeed Sumon.
An assistant professor of International Relations Department at DU, Rumana sustained severe injuries as Sumon pushed his fingers into her eyes at their Dhanmondi residence in the city on June 5.
After initial treatment at LabAid, she was taken to Sankara Nethralaya, an eye hospital in Chennai in India, on June 14. Later she was shifted to Arvind Eye Centre in Pondicherry.
Ophthalmologists there confirmed that her left eye has gone blind permanently while the retina of the other one is not responding to her brain.
“Only some miracles can bring back the vision of my daughter,” her father Manzur Hossain said quoting Indian doctors.
Recalling the torture by her husband, Rumana broke down into tears.
“He assaulted me before my five-year-old daughter and left the room leaving me in a pool of blood.
“My daughter was crying. I could not see anything at that moment. My head was hit against some furniture when I tried to get out of the room with my daughter,” she said.
Also a postgraduate student at the University of British Columbia in Canada, she said Sumon started torturing her within days after their marriage. But she forgave him time and again thinking of their only daughter, Anusheh.
“Please, press for his punishment.”
Asked about the allegation of a romantic relation with an Iranian man during her stay in Canada, she said: “Please don't believe such fabricated allegation. Ask those I stayed with in Dhaka and Canada. Nobody can make such allegation.”
Earlier, her friends at the university in Canada and the Bangladeshi community there said the accusation of infidelity is “nonsense,” and is an attempt to damage her reputation.
Rumana's lawyer Elina Khan, who was present at the press briefing, fears that one of Sumon's lawyer uncles might influence the case against Sumon.
Police arrested him on June 15.
A Dhaka court yesterday placed him on a two-day fresh remand in a case filed for an attempt to murder Rumana. He was earlier remanded for three days in two phases.
Bahauddin Faruki, sub-inspector of Detective Branch, in his remand prayer said Sumon needs to be quizzed before Rumana.
Also yesterday, 45 academics, writers, lawyers, human rights activists and media personalities in a statement expressed concern that Rumana is being subjected to character assassination by a section of the media and some individuals on social media.
They condemned any attempt to justify the cruel attack on Rumana.
Meanwhile, DU teachers of international relations department in a press release demanded shifting of the case against Sumon to a Speedy Trial Tribunal.
Education Minister Nurul Islam Nahid and State Minister for Women and Children Affairs Shirin Sharmin Chowdhury visited Rumana at LabAid.
Nahid ensured the family members that her assaulter will be brought to justice.