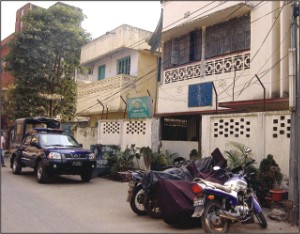 In a renewed commitment to tackling crime in the 'crime infested' Sabujbagh, residents and local organisation leaders from different neighbourhoods are lending a hand to police for making a list of wanted criminals of the area, said police sources.
Presently, the list has around 30 names of local criminals including drug dealers and peddlers, robbers, automobile thieves and burglars, the sources said adding that the list is still in its primary stage. It will be updated regularly with the help of the locals while the informers will enjoy complete confidentiality.
"We are regularly discussing these matters [with local residents]. We are confident that soon we will have a comprehensive list of hoodlums and criminals in the area," said an official concerned at Sabujbagh Police Station.
The idea was conceived during an Open Day -- an open discussion between the police and local residents -- at Sabujbagh Police Station. The Open Day is aimed at improving cooperation between the police and the citizens.
Syed Abdur Rouf, officer in charge (OC) of Sabujbagh Police Station, said, "Our focus is firmly on reducing crime and disorder. To get this done, we need help from communities and other social organisations."
"The local residents have a better idea of what goes on in their neighbourhood. So, they can help tackle a wide range of problems -- from anti social activities to more serious crimes," he added.
Over the years, Sabujbagh has earned the bad reputation of being a safe haven for notorious criminals in the city. Sabujbagh residents are living in a constant state of fear as crime in the area has gone up recently.
Sabujbagh Police Station is the lone police station for this vast and densely populated area on the eastern fringe of the city where Basabo, Madartek, Badda and Wahab Colony are situated.
Limited workforce, logistics and intelligence have been weighing down the efforts of Sabujbagh Police to keep crime and disorder in check.
"The community has a lot of problems -- land disputes, dowry-related problems, antisocial activities including drug addiction, gambling, theft, teasing women, etc. Most of the times, the local residents and even the victims are fearful to report these," said an official from Sabujbagh Police Station.
"We are trying to bridge the communication gap between the police and the general public. We are asking them to come forward, make their voices heard and assist us to keep the criminal and antisocial activities in check," he said.
Sabujbagh residents were also optimistic and enthusiastic about the recent steps taken by the police.
"The police seem to be sincere in their efforts. They are paying close attention to what we have to say -- which is a good sign. However, how fruitful these meetings will be, will mostly depend on their [police] sincerity and effort. That is something only time can tell," said Mofazzal Hossain from North Bashabo.
"This region has always been one of the hotspots in the city when it comes to criminal activities, mugging, petty theft and drug peddling -- you name it," said South Bashabo resident Shahjahan Islam.
"The worst part is that most of the incidents go unreported. Most of the residents are also afraid of reporting the illegal activities. Now that the police have reached out for our assistance, maybe things will get better now," he added.
Syed Abdur Rouf, the OC of Sabujbagh Police Station, said, "The open discussions have been really fruitful. Through these meetings, we have been able to identify different concerns of the local residents. With the help of the citizens we will hopefully be able to hunt down the local hoodlums as well."