Coastal land in Aila-hit areas turns barren due to salinity
Emran Hossain, back from southwestern districts 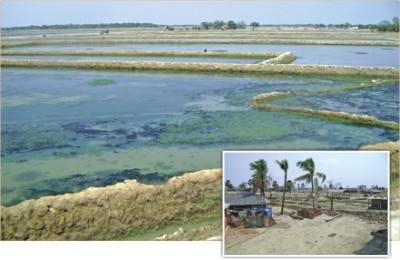 Shrimp production resumes in the Aila-hit area of Shyamnagar in Satkhira. Many farmers are against the return of shrimp cultivation as it has already affected the fertility of the land. Inset, even grass does not grow on the saline-affected land of Gabura union in Satkhira. Photo: Emran Hossain