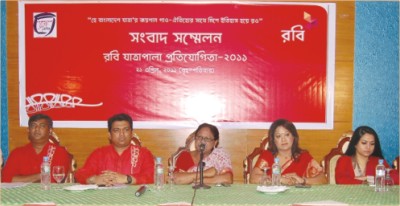 Jyotsna Biswas speaks at the programme.

Production house Jatravision is organising a competition on jatrarapala. At a recent press conference, the organisers announced that the primary selection for the contest will commence in June this year. Mobile phone operator Robi is sponsoring the competition. Chief Advisor of Jatravision and renowned jatra actor, Jyotsna Biswas; Jatravision Chairman, Aruna Biswas; producer Mithu Biswas and officials of Robi attended the conference.
Over 100 jatra (an indigenous theatre form) troupes are expected to compete at the selections in Gopalganj, Barisal, Khulna, Dhaka, Narsingdi, Netrakona, Sirajganj and Bogra. Jyotsna Biswas said that jatra is “one of the most powerful of our folk traditions. But it has also been an art form hitherto neglected by the urban, educated class.” She thanked the government and private organisations for taking initiatives to breathe new life into this traditional art form. On a similar note, Javed Ahsan of Robi said that the competition will be an important step towards revitalising the tradition of jatra.
Ten stages will be set up in different regions of the country on which 12-16 jatra will be performed each day during the competition. The troupes, willing to compete in the festival, are required to have no more than 15 members. The judges will select three troupes from each venue (region). Thirty troupes, qualified for the second round will be fighting to earn a spot among the top ten at the finals.