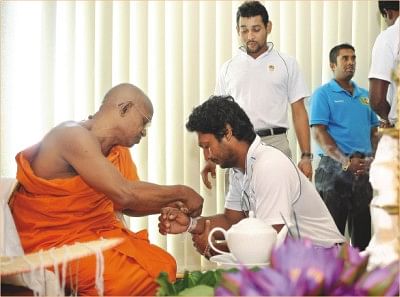 The last time the media in Sri Lanka met a player in this World Cup, thankfully, was a happy occasion. Sri Lanka captain Kumar Sangakkara was almost late by half an hour but that didn't dampen the spirit. It was also touching how gracious the skipper was in his praise to the retiring legend, the country, the team and the opposition.
“It means a lot to us. We have planned two years for this. We missed a great opportunity in 2007. To be here was very special for us and important as well,” said Sangakkara during the press conference at the media centre on Tuesday after their 5-wicket win over New Zealand.
“I think it means a great deal to the country, especially in a new future that is envisioned for Sri Lanka. For us to be host the World Cup and for the team to be in the final, I think it bodes very well for the future of our country,” he added, describing how important the sport has been in trying times.
“Cricket has always been the panacea that healed all wounds in SL. Whenever cricket was played it seemed it was back to normal. We carry that responsibility and we are privileged to be in this position, playing for Sri Lanka,” he said.
The day was momentous for Sanga-kkara's favourite spinner in the world as well. It was obviously Muttiah Muralidaran's last game in Sri Lanka and Sangakkara said that he did become emotional when it hit him that he won't be keeping wickets to Muralidaran after April 2.
"Dilshan and I should have finished it or got us as close as possible. We let that opportunity go and put the team under pressure. I thought Dilshan was batting beautifully. We should have been clinical but in hindsight, it was good the middle-order showed what they were capable of.
“It was emotional because it was the last game we are playing in front of our home crowd. It was a very special moment for us and it was more so because it was the last time Murali would play a game on home soil.
“When the magnitude of that occasion hits you, it overwhelms you that you are going to play the last match with the world's best bowler,” he said.
Muralidaran got a wicket off his last ball in ODI cricket at home, much like he got a wicket off his last ball in Test cricket. Sangakkara said that because Muralidaran is such a kind soul, fairytale endings are bound to happen to him. “He talks a lot in the dressing-room. He is always predicting something, it has to do with cricket. He's always been that for us. Every time he's played, he's done wonders for us. He has no ego, a great team man. I think why he gets these fairytale endings is because he's a great human being. He's an honest, hard working guy who has no pretence. I think that's why good things happen to him,” he said.
Amid all the bonhomie, Sangakkara warned his teammates not to get too complacent. “Everyone in the dressing room was happy. But we have to come off that high because once we get into that flight, the final is the game that counts,” he said.