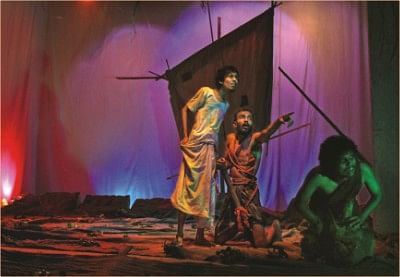 A fortnight-long theatre festival featuring productions by students of the Department of Theatre, Dhaka University, begins today at the university's Natmandal auditorium. The festival, titled "Robi Srijonshil Tarunyer Natyaprakash 2011", will feature 25 plays and will continue till March 15. The plays will highlight a diverse range of theatrical works -- from indigenous forms of Bangladesh to world classics from Europe and America.
The organisers informed that the featured plays are part of the final year students' curriculum. Each play is being directed by a student from the batch.
Chairman of the department and noted actor Rahmat Ali hopes that the festival will provide an array of theatrical styles and genres. "I hope the plays will be good in terms of quality and the audience will enjoy each of them," said Ali.
Some of the plays to be staged at the festival are -- "Ujaney Mrittu" (written by Syed Waliullah); "Mukhosh" (adapted by Syed Shamsul Haq); "Juktihin Joog" (by Abdul Mannan Syed); "Kaththokra" (by Buddhadeb Basu); "Bichar Gaan"; "The Old Man and The Sea" (Ernest Hemingway); "Enigma" (Floyd Dell); "The Dumb Waiter" (Harold Pinter); "Padodhoni" (adaptation of Samuel Becket's work); "A Marriage Proposal" (Anton Chekhov); "The Audition" (Rudolf Sirera) and "Death Knocks" (Woody Allen).
The duration of the plays will range from 30 minutes to over one hour. The shows will start in the evening.
Telecom operator Robi is the sponsor of the festival.