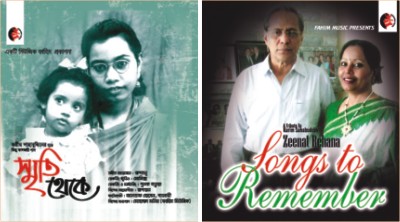 To re-popularise the songs of the '60s and '70s for posterity, noted singer Zeenat Rahana has recently recorded 17 songs on two separate CDs, "Smriti Thekey" and "Songs To Remember."
Zeenat is the daughter of Zebunnessa Jamal, an outstanding lyricist of Bangladesh who obtained the Nagendranath Gold Medal from the Calcutta University in Bengali literature. Jamal was a lyricist with a profound aesthetic sense, reflected in the romantic songs written by her. She proved that romantic songs can be written without going into obvious expressions. Her songs had magic and the ability to touch peoples' hearts.
Both radio and television have contributed in promoting unforgettable songs in Bangladesh and abroad. Though the late '60s are referred to as the 'golden era of music' in Bangladesh, unfortunately, at that time radio and television had no mechanism to preserve those songs.
Zeenat has been a part of the Bangladeshi music scene for over four decades. Her two new CDs, besides taking the listener down memory lane, represent a great initiative.
The album "Smriti Thekey" incorporates Zebunnessa Jamal's eight songs: "Shudhu Ekbar Ogo Bondhu", "Elo Ki Phirey Abar", "Ei Mon Jodi Konodin", Tumi Bolo Abar Keno", "O Naam Na Jana Pakhi", "Ami Ei Tho Pashey", "Ei Shondhya Hobei Ki Britha" and "Janina Keno Raat-er Chokhey". Rooptanu has arranged music for the album.
"Songs To Remember" is a tribute to the renowned composer Karim Sahabuddin. The repertoire of the album includes nine Urdu ghazals. Sumon Reza Khan, Muntakim Chowdhury and Rooptanu have arranged music for the album.
"My objective is to make the songs available to the present and future generations looking for melodious, romantic songs by music directors like Karim Sahabuddin who tuned the superhit song "Sagorer Teer Thekey" [written by ZebunNessa Jamal]," said Zeenat.
Under Fahim Music's banner, Eastern Bank Limited has sponsored the albums.