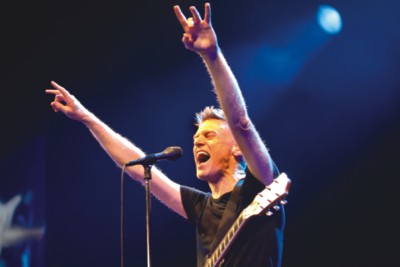 "Summer of 69" hitmaker Bryan Adams will be performing at the 2011 ICC Cricket World Cup opening ceremony in Dhaka on February 17.
Adams will remain one more day in Dhaka for a special acoustic concert featuring songs from his current album "Bare Bones".
Adams is the only western artist to be performing at the gala opening, which will see Bollywood trio Shankar-Ehsaan-Loy belting out the official song, "De Ghuma Ke".
The performance on February 17 will be broadcast to a TV audience of 200 million people by ESPN, said a press release. It will fall near the end of the Canadian singer's Indian tour that begins on February 11 in Pune. Also on his itinerary are Bangalore, New Delhi, Hyderabad and Mumbai, the city where Bryan's first concert in India was held in January, 1994.