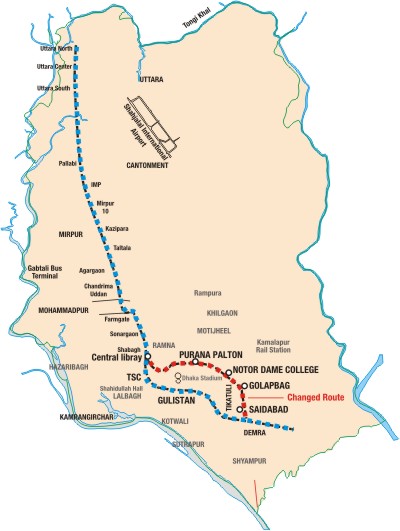 The communications ministry is going to modify a part of the first-phase route of Dhaka metro rail considering commuters' convenience.
The route from Uttara Third Phase to TSC of Dhaka University via Pallabi, Farmgate, Sonargaon Hotel will remain unchanged. From TSC, the route will divert towards Curzon Hall, the Jatiya Press Club, Bangladesh Bank and up to the Kamalapur Railway Station.
As per the existing plan, the route from TSC was supposed to touch the Central Shaheed Minar, Fulbaria, Gulistan and Tikatuli before reaching Syedabad.
“We are considering the modification to benefit more people from the service,”
said Saleh Uddin, additional executive director of Dhaka Transport Coordination Board.
He said the majority of those who live in Mirpur area come to Motijheel for various purposes while the present route conflicts with the Gulistan-Jatrabari flyover.
The communications ministry yesterday discussed the modification with a team from Japan International Cooperation Agency (JICA), which showed interest in financing 80 percent of the project cost -- $1.7 billion -- while the government will bear the rest.
“I asked the JICA team to complete a feasibility study on the modified route by this March,” Communications Minister Syed Abul Hossain said after the discussion.
Earlier, JICA study chalked out three routes for the metro rail and showed interest in the first part dubbed Mass Rail Transit-6. This part of the route will be 22-kilometre long, stretching from Uttara Third Phase to Syedabad.
The first phase of the metro rail will be built mainly over government land and existing roads. There is, however, a chance that 1.8 kilometres of the proposed metro rail between Bangladesh Bank and Kamalapur Rail Station be underground.
“This small stretch has several high-rises and the government will have to require land. So, building underground tracks will be the best option here,” architect Tanwir Newaz, also a consultant of DTCB, told The Daily Star.
He also spoke for diverting the route from TSC. “Apart from the Gulistan flyover, the present route will also disturb the Central Shaheed Minar and the under-construction Asad Memorial near the emergency unit of Dhaka Medical College Hospital,” he observed.
According to the JICA study, Japan and Bangladesh are scheduled to complete financial negotiations by this June, after which a detailed engineering study is supposed to be carried out.
The study estimated $12 million for each kilometre of the elevated part, while $48 million per km underground.
The government earlier said it would begin construction of the first phase by July 2013, but everything seems to be delayed by months.
“We want to complete all the formalities in the quickest possible time as we target to construct a considerable portion of the metro rail within the tenure of the present government,” said the communications minister.
Meanwhile, the JICA team led by its director Tomohide Ichiguchi also inquired about the progress of different projects funded by Japan, including that of reforming the Bangladesh Railway.
JICA has committed $730 million to revamp the 150-year-old Bangladesh Railway.
Railway Director General TA Chowdhury informed that they could not form the proposed line of business (LOBs), an important part of the reform, due to no clearance from the ministry.
Communications Secretary Md Mozammel Haq Khan said the finance ministry approved formation of the LOBs and they would soon give the clearance.