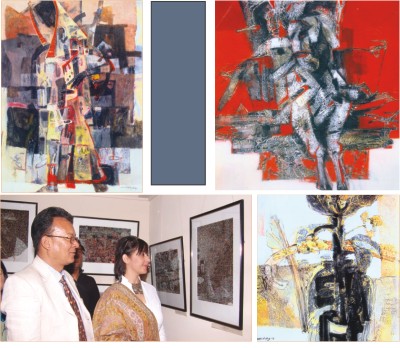 Shanto-Mariam Foundation has organised a retrospective exhibition featuring the works of Mostafizul Haque, an Associate Professor at the Drawing and Painting Department, Faculty of Fine Arts, University of Dhaka. The exhibition is now being held at Creative Destination, Shanto-Mariam University of Creative Technology, Uttara, in Dhaka. Haque studied Japanese styles of painting at the University of Tsukuba. His works feature both abstract and figurative elements.
Noted Bollywood actress Manisha Koirala inaugurated the exhibition on January 19 at Shanto-Mariam University of Creative Technology. Professor Nimchandra Bhowmik, Bangladesh High Commissioner to Nepal; Ziaul Haque Chowdhury, Deputy Governor of Bangladesh Bank; Krisna Chandra Arian, Nepalese High Commissioner to Bangladesh and Imamul Haque Kabir Shanto, chairman of Shanto-Mariam Foundation, among others, spoke on the occasion.
The exhibition features over 40 paintings made since 1975, most of which have never been on display before. The works are in oil, acrylic and watercolour.
Presently Haque's works can be regarded as abstract-expressionistic where colour is the most noticeable aspect and forms synchronise well with space and compositions.
Haque portrays nature and its mysterious phases through his personal notion and experience. Most of his nature-based works' are titled “Image from Nature”, “Essence from Nature” where flora and fauna are in focus. The works also reveal his fondness for pure forms and compositions. Female forms in the works look melancholy and have a hazy appearance.
Haque's “Still Life” depicts fruits, flowers and varied objects like glasses and wine bottles.
Haque followed pure realism trends back in the 1980s. An oil painting from this period depicts a slum, where a thatched hut, some chicken and hanging clothes get the focal point. The work has a touch of impressionism with its mellow colours and meticulous texture.
Intense observations of surrounding, life and nostalgia make the paintings remarkable. He has used thick and sweeping brushstrokes, which establish a lively hallmark. Emerald green, grey, azure, red, crimson, off-white and yellow have been frequently used in his works.
At the exhibition, his “Ready for Sacrifice” and “Horse in Red” are more realistic and detailed. Both paintings feature soft colours and the painter has taken considerable time to create the foundation of the paintings
“Illusion in Figures”, an oil painting, depicts varied curved lines and fragmented imagery. Some animal and human forms are also visible in the work.
The painter has given considerable time to the selection of works for the exhibition. He has worked on a number of themes and there are several modes of expressions. The painter has made a great attempt to work on traditional and conventional themes.
This is Haque's first solo exhibition in Bangladesh. He has held three solo exhibitions in Japan where he had his higher education.
The exhibition will continue till January 25.