Love among the Mughals 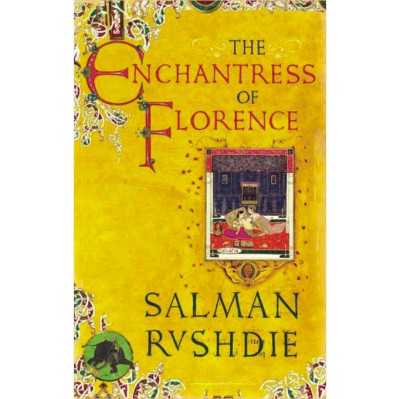 Out of a brothel, perfumed desirably and trailing a mysterious bloodline, an 'overly pretty' traveler reaches the magnificent court of Mughal emperor Akbar. Despite his foolish choice to wear a coat of coloured leather lozenges in the heat of Fatehpur Sikri, the traveler wittily introduces himself as 'Mogor dell'Amore', the Mughal of Love. As Akbar falls prey to his silvered tongue, the yellow-haired traveler starts to relate a story of love which can 'make his fortune or else cost him his life.'
Thus begins the enchanting tale of The Enchantress of Florence. And perhaps at the apex of his career Salman Rushdie, pulling colourful threads of history in the background, fuses lore, legends and facts to form a sea of stories much like the one showed to 'Haroun' by his father and talked about by Rushdie in many of his lectures. This novel, a sea tormented by a tempest of carnal as well as divine love, doesn't fall in between the East and the West but encompasses both of them. And not as a bridge between the two worlds but more of a circle containing everything is the image of a woman: Qara Koz, Lady Black Eyes.
This enigmatic princess is supposedly a descendant of Genghis Khan and is also the Mughal emperor's great aunt. Being the Angelina Jolie of her time, she was captured by a warlord and then, through the skillful use of beauty and sorcery, she climbed the beds of many powerful men, ultimately ending up in the arms of commander Argalia. It is during this dangerous travel across the arms of kings and commanders that Qara Koz moves from the East to the West and reaches the charming city of Florence, where her beauty casts a binding spell on everyone who glances at her. And as you might have guessed by now, by virtue of that gift, she is named as the enchantress of Florence.
Surprisingly the novel doesn't focus just on the princess. Her presence as the invisible driving force is always felt but simultaneously Rushdie treats his readers with delightful digressions. The whore who is an expert in scents, the painter who disappears into his painting, the seductive Jodha bai who is merely a figment of Akbar's imagination, the amusing Birbal and the miraculous voice of Tansen which can 'open the seals of the universe' are some of the many wonderful sketches from history framed in this book.
Not to mention the fascinating character of Akbar who is possibly the first secularist emperor in this part of the world. Akbar, as Rushdie portrays him, is a 'Muslim vegetarian, a warrior who wanted peace, a philosopher-king: a contradiction in terms.' Walking in the garden, Akbar ponders as much over the curves of his women as about 'I' and 'we': the singulars and plurals of the universal soul. Using the king's curiosity, the traveler's mesmerizing storytelling and the sweet enigma of the princess Rushdie chisels out a multi-facaded artwork that dishes out the paradox of the creator and the created, the controversy of wine over water, the dual-ended fusion of east and west, the debate between atheism and religion about which Birbal says that all atheists believe in one God less than the believers.
And as if to sum up all the worldly contradictions, the book declares, 'The curse of the human race is not that we are so different from one another, but that we are so alike'. Indeed, in a wiser-than-before Rushdie's glorious prose which is florid, entertaining and definitely readable, this message comes out so strikingly that I smiled and nodded as I closed the book in satisfaction.

Efadul Huq, currently pursuing higher studies in the United States, is a regular book reviewer for The Daily Star.