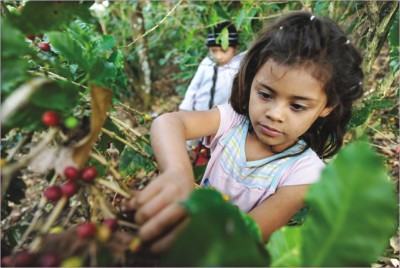 A child harvests coffee beans in the department of El Paraiso, 120km east of Tegucigalpa, on December 20. Honduras, a country that hopes to become the the first coffee exporter in Central America, does not regulate child labour. Photo: AFP

Evelyn and Carlos toil for 10 hours a day on chilly mountainsides in Honduras, filling baskets with ripe red coffee beans for a handful of dollars: they are six and eight years old.
"Sometimes I fill up to seven baskets a day," said Evelyn, deftly swatting branches out of her way before picking prime Honduran coffee beans and dropping them into a wicker container hanging from her tiny waist.
Evelyn's estimate was likely a bit off since Carlos, two years her senior, said he only managed four -- Evelyn could easily be forgiven as she had just started school and was still learning basic arithmetic.
The children probably manage to pick about 30 kilograms (66 pounds) of coffee beans a day. Their rich produce sold this week at market for 2.34 dollars a pound -- a daily haul, therefore, worth roughly 150 dollars.
"I give the money I make to my mommy," said Carlos of his eight-dollars-a-day wage.
More than 100,000 Hondurans work in the plantations during the four-month harvesting season that begins in October.
Government data shows up to one million people are permanently employed in an industry that represents some 15 percent of the small and poor Central American nation's GDP.
Many of those seasonal workers are children and while the Honduran government does not regulate child labour, employers are aware that what they are doing is wrong.
"We're short of manual labor and you can't just let the beans fall off" and rot, said Faustino Gonzalez, who owns La Tomacita, the plantation where Evelyn and Carlos work.
Adults are put off by the hard work on mountainsides that are often drenched in rain or blanketed by chilly mists, explained the coffee-grower.
"Each day we get fewer workers and that's why we turn to pickers of all ages," said Gonzalez.
"We make sure the children are always next to their father or mother so they can keep an eye on them and get them out of harm's way... sometimes there are steep ravines on the property and they can slip and hit their head on a rock or a log."
A few plants down from where Evelyn and Carlos, David and Darwin -- 12 and 14 respectively -- picked alongside their father Santos Vasquez, stripping branches clean of coffee beans at breakneck speed, trying to make enough money to buy some clothes.
"I hope to reach my goal by Christmas Eve," said Darwin, who had just finished elementary school and knew his family was too poor to give him any further education.
Gonzalez said he expected the 12 hilly hectares (30 acres) at La Tomacita -- near the village of El Paraiso (Paradise) to yield about 200 48-kilogram (105-pound) sacks of coffee.
Honduras' booming coffee industry is the third-largest in the Mexico, Central America and Caribbean region, according to the Global Agricultural Information Network.
The last 2009-2010 growing season yielded four million sacks of coffee, 610 million dollars' worth of which was exported, said the Honduras Coffee Institute, which hopes production will one day be the biggest in the region.
But Honduras is also one of the few countries around the world that does not ban child labour. Latest UN figures showed some 215 million children are still put to work around the world, most of them in hazardous conditions.