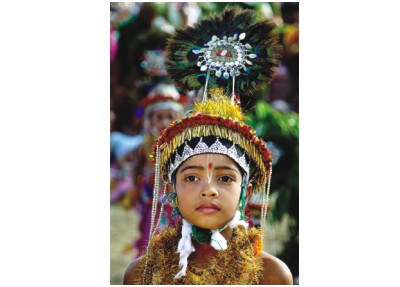 To go to the Manipuri Raash Mela, you head towards Bhanugach from Sreemongol. After a right turn at the Komolganj intersection, the signs become unmistakeable: CNGs and vans with brightly dressed people, colourful posters and arches, and a festive spirit in the air.
I reach the Mela at 3 PM on November 21st. Held during the first full moon of Agrahyon, the Raash festival celebrates the mythical love story of Radha and Krishna. It is the largest festival of Manipuris of Bangladesh.
How did people from Manipur, now a state in eastern India, end up in Bangladesh? Manipur was once an independent country. Their king and many others - took refuge in Sylhet after a war in the 1800s. Bangladeshi Manipuris are their descendants. Hindus by religion, they have distinctive facial features and their own culture and language.
One attraction of the Mela is Manipuri dance, performed during the day and late at night. The daytime dance proceeds on three separate arenas, with children and teenagers wearing colourful costumes to re-enact Krishna's role. Hundreds watch with admiration as the dancers play out parts of the popular story. For example, a giant stork appears and fights with Krishna, only to be vanquished rapidly. That would be Bogeshwar, a (somewhat inept) villain. In the story, Krishna's flute-playing wins over Radha; and so each dancer holds a flute and mimics playing it with flair. The colours and movement combine with hypnotic effect.
When the dance is over, anxious parents seek out their dancer children. One mother, peeling a banana for her hungry and tired son, tells me it took three hours to dress him for the dance. Happy fair-goers reward the performance by slipping cash into the dancers' hands.
I know no one here, but people are friendly and quick with a smile. I meet an eighty-year-old man who has travelled from Sylhet, seventy kilometres away. What brings him here? “I want to have fun,” he replies, toothless but eyes twinkling.
The women look beautifully exotic. Decked out in ornate Manipuri saris and elaborate jewellery, their lips are red from paan-chewing, a favourite Manipuri pastime. I see four young women sharing snacks behind the dance arena and approach them. One immediately warns the others: “Cameraman coming. Fix your hair!” They pose gracefully for my camera.
Later, I make eye contact with two grandmother types. At first, they stare back at me, tense. I ask them if I can take their photo. This breaks the ice as one says, “Oh, he speaks Bangla... he is one of us.” I tell them they are looking very beautiful and they crack up, giggling like schoolgirls.
Dusk arrives all too soon and the Mela winds down. I leave thinking about the people here. They are everyday Bangladeshis, living difficult, demanding lives. Yet they have invested much effort into this celebration, making it a magical and joyful experience. Bravo!
ihtishamkabir@yahoo.com