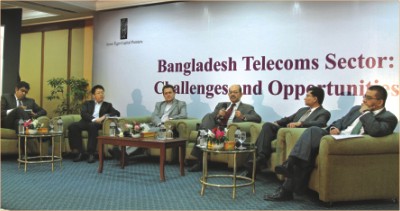 The number of mobile subscribers will reach 100 million by 2013 if the government cuts high SIM tax, said a study of a leading research organisation yesterday.
The findings of the report were revealed at a seminar on “Bangladesh Telecoms Sector: Challenges and Opportunities” at the Dhaka Sheraton. It was coorganised by Asian Tiger Capital Partners and the Association of Mobile Telecom Operators of Bangladesh (AMTOB).
Mobile penetration, which has seen an unanticipated growth in the country during the last one decade, can remain strong with enough regulatory support and intense competition within the sector, the report said.
However, uncertainties and lack of clarities regarding the renewal of licences and issuance of 3G networks as well as high tax remain potential constraints, said the study conducted by Asian Tiger Capital Partners.
"From only four million subscribers in 2004, the telecom industry has witnessed a considerable growth to reach 65 million by September 2010," said Ifty Islam, managing partner of AT Capital.
"This growth has had a transformative impact on the economy in terms of aggregate investment, FDI and productivity levels apart from benefits from greater connectivity and poverty alleviation," he said in a presentation.
Highlighting the country's relatively low mobile penetration rate, he underlined the need for flexible and supportive regulatory environment and framework to further tap the potentials of the sector.
"For instance, there is a lack of clarity about the renewal process or cost of the licences of four telecom operators which will expire in 2011 and at the same time the process and timing of 3G licensing," Islam said.
"This needs to be resolved quickly if future investment plans by the telecommunication companies are not to be delayed."
Identifying the Tk 800 SIM tax as an impending factor for growth, the report said the sector already suffers from one of the highest tax rates in the world.
Chief Executive Officer of Grameenphone Oddvar Hesjedal said: "Despite the country's growing penetration rate, the basic voice services are likely to remain the main usage base in Bangladesh in the years to come."
"This would be an important aspect of Bangladeshi telecom market as we are looking forward to transform our services from 2G to 3G technology."
Hesjedal also envisioned that the mobile penetration rate can even double to 120 million subscribers by 2016.
CEO of Banglalink Ahmed Abou Doma called for setting up a common 3G network for all mobile operators to ensure a faster rollout.
"A common 3G network will increase the cost efficiency of all operators, guaranteeing a rapid rollout," he said.
The Banglalink chief executive also observed a declining growth trend in the mobile subscriber base in the recent times and urged more flexible regulatory regime to ensure faster growth.
Sunil Kanti Basu, post and telecommunications secretary, said: "As security will remain a top issue while assuring people's access to mobile phones, the government will obviously keep in mind the need for making it available to a greater segment of the young population.”
Not specifying any timeline for issuing the guidelines for 3G licences, Basu said: "To facilitate the operators, we want to make sure through the regulator that 3G is not issued before the renewal of the operators' licences."
Speakers at the seminar also called for increasing the internet access through mobile phones, and emphasised greater rural penetration.
Abu Saeed Khan, secretary general of AMTOB, said it is the mobile industry that has connected the entire nation.
The telecom industry has now reached a stage where there are the giant operators and network service providers and the country does not have to look beyond the boundaries for capital and expertise, Khan said.
"Digital Bangladesh has captured the core of national development. The government is trying its level best, but its objectives have not yet been fulfilled," he said.
Md Mujibur Rahman, managing director of state-run Teletalk, said a huge rural population are still largely deprived of owning a mobile phone connection and this is an area where the operators should focus on.
"To make our services more accessible and user-friendly, we should also work to develop contents in Bangla," said Bidyut Kumar Basu, chief marketing officer of Robi.
The AT Capital report also focused on declining Average Revenue Per User (ARPU) within the telecom industry, as the next phase of growth is likely to focus on the rural subscribers.
"These rural subscribers are more price sensitive, they have a greater propensity to hold multiple SIMs and engage in carrier switching for the best rates to ensure marginal spending," the report said.
The research also predicted a number of consolidations in the telecom market in the near future and forecast an increasing competition from the newer operators.
"We believe that at least one merger is likely in the next 12 to 18 months, namely Bharti Airtel and Citycell. Aggregating spectrum is perhaps the key attraction for Bharti to consider such a merger," it said.
"It also seems likely that the market share of the current top 3 players -- GP, Banglalink and Robi -- will come under pressure from Warid/Bharti's likely aggressive push for market share in 2011."
The report also emphasised convergence and finding new areas for diversifying revenues, such as the value added services and data services as potential areas of growth for the sector.
The study pointed at the opportunities to form public-private partnership in the areas of e-education, e-health and e-governance.
Anir Choudhury, policy adviser of A2I of the Prime Minister's Office, Per-Henrik Nielsen, CEO of Ericsson, Wonder Wang, chief executive of Huawei, and Fahim Mashroor, senior vice president of BASIS, also spoke.