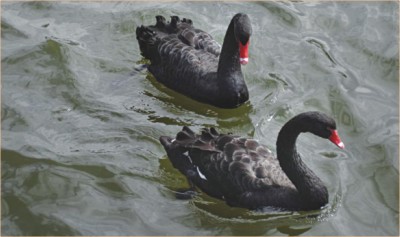 The black swan theory explains rare events that are beyond the realm of normal expectations in history, science, finance and technology. Photo: Sarwar Ahmed

It was a chilly April morning when Fakhruzaman, my Bangladeshi colleague who works for Syngenta in Europe, drove me for a sightseeing tour through the idyllic English countryside near Cambridge. We stopped over for some tea and muffins in a restaurant next to a small river. White swans floated on the cold water next to the bank, waiting for wayfarers to throw titbits for them to savour. I was taken aback when I saw a couple with swans, which were black in colour. Until then, I never knew there were black swans.
According to Wikipedia, until the mid 16th century, Europe knew only of white swans and a black swan was used as a statement of impossibility. Only after a Dutch expedition in 1697, led by explorer Willem de Vlamingh, the black swan was discovered on the Swan River in Western Australia. The term metamorphosed to connote that a perceived impossibility might later be disproven.
As I read through Malcolm Gladwell's latest book, What the Dog Saw, one particular chapter stuck on like a post-it. It is about the black swan theory, conceived by a Lebanese, Nassim Nicholas Taleb, who also has a best-selling book on the subject.
Taleb explains that a black swan is an event with three attributes. First, it is an outlier, a rarity, as it lies outside the realm of regular expectations, because nothing in the past can convincingly point to its possibility. Second, it carries an extreme impact. Third, in spite of its outlier status, human nature makes us concoct explanations for its occurrence after the fact, making it explainable and predictable.
As Wikipedia states, this theory explains: 1) the disproportionate role of high-impact, hard to predict, and rare events that are beyond the realm of normal expectations in history, science, finance and technology, 2) the non-computability of the probability of the consequential rare events using scientific methods owing to their very nature of small probabilities, and 3) the psychological biases that make people individually and collectively blind to uncertainty and unaware of the massive role of the rare event in historical affairs.
Who dreamt the 9/11 would happen, or the financial meltdown of 2008? Taleb did bet that a black swan would hit the financial system sooner or later, prior to its meltdown. His black swan theory proved him true with the catalytic event of 2008 and its far-reaching consequences on the global economy.
Here is an interesting piece I came across recently. The global risks advisory firm Maplecroft has released a new Climate Change Vulnerability Index, which enables organisations to identify areas of risk within their operations, supply chains and investments. It evaluates 42 social, economic and environmental factors to assess national vulnerabilities across three core areas: exposure to climate-related natural disasters and sea-level rise; human sensitivity, in terms of population patterns, development, natural resources, agricultural dependency and conflicts; thirdly, the index assesses future vulnerability by considering the adaptive capacity of a country's government and infrastructure to combat climate change.
The index rates 16 countries as 'extreme risk,' including nations that represent new Asian economic power and possess significant forecasted growth. Maplecroft rates Bangladesh as the country most at risk due to extreme levels of poverty and high dependency on agriculture, whilst its government has the lowest capacity of all countries to adapt to predicted changes in the climate. In addition, Bangladesh has a high risk of drought and the highest risk of flooding, according to the Maplecroft website.
The grim predictions include a deterioration of agricultural productivity. According to International Food Policy Research Institute, a crop model based on climate change indicates that in South Asia, average yields in the year 2050 for crops will decline from 2000 levels by about 50 percent for wheat, 17 percent for rice, and about 6 percent for maize.
Is climate change our black swan? Unlike Taleb's black swan theory of unpredictability, the saga of climate change is inevitably unfolding. As is our good old habit, all we do to mitigate climate change is ask for a dole with the proverbial bowl in our hand.
To ensure food security, we need to increase agricultural productivity in a situation where our population is on the rise, we continue to lose arable land, become vulnerable to erratic weather and consequently, water resources dwindle.
Do we sense this urgency to adapt our agriculture at a faster rate or just cope with fulfilling current needs? Newer agricultural technologies, be it water availability and use, seeds, mechanisation or chemicals, need to be adopted to cope with the dawning reality.
As an example, let us look at the major resource for sustainable agriculture, water. It isn't only Dhaka that needs its canals to be dug to keep self-righteous activists happy. We need to make water available for agriculture in a more sustainable way, instead of raising our hands for providence to deliver.
To tap this resource for agriculture, we need to dig, dig out irrigation channels that can hold water during the monsoons and are linked up with our rivers to draw water during drier times. It seems Maplecroft's statement of our government's capacity to adapt and understand the new reality is indeed true. The black swan is flying in our direction. Are we ready to face it?

The writer is the managing director of Syngenta Bangladesh Ltd.