Passing away of a freedom fighter and nationalist 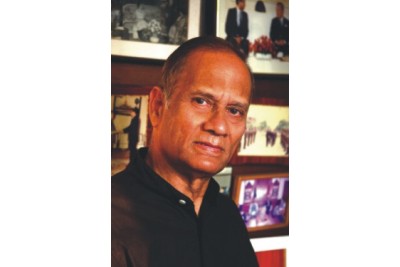 THE untimely and sad demise of Major General Moinul Hossain Chowdhury B.B (Retd) on the morning of October 10th, 2010 came as a deep shock to me.
On completion of high school, Moin joined the 29th batch of the Pakistan Military Academy (PMA). Soon, he was appointed a Battalion Sergeant Major (BSM) in the PMA, a rare distinction achieved by few Bengali cadets at that time. Commissioned in 1964, Moin traversed through several important posts, including Aide de Camp to the General Officer Commanding (GOC) 14 Division based in Dhaka. In the eventful days of 1971, Moin was a company commander of the Second East Bengal regiment based in Joydebpur.
Conscious of the political developments in the country, Moin had no doubt as to what was in the offing in the political horizon of Bangladesh. The historical address of Banghabandhu on March 7, 1971 was a signal to the then Bengali army officers based in Bangladesh, including Moin who prepared himself for any eventuality.
During March '71, the Pakistan army started increasing its strength in Dhaka. The people of this country continued to agitate against the perceived conspiracy of the Pakistan army to thwart the Bengali aspiration. Some people of Joydebpur, led by a local Awami League leader threatened to march towards Joydebpur cantonment and put up road blocks and barricades in order to prevent the movement of the Pakistan Army.
At this critical juncture of the nation's history, Major Moin was asked to take his company to remove the barricades and shoot at sight in the event of any resistance. It was he alone who had to take the decision. It was the Bengali part of Moin that prevented him from taking any drastic actions against the Bengali agitators, and he calmed the situation by joining the crowd and telling them that he was a Bengali and a part of them. This incident may well go down in history as a precursor of our War of Liberation.
On the night of March 25, 1971, the Second East Bengal regiment was without its Commanding Officer (CO). The entire responsibility thus fell on then Major Shafiullah, second-in-command. It was Moin who gave him all the support to launch the resistance against the Pakistan army.
Subsequently, Moin fought valiantly during the war of liberation. He was bestowed with Bir Bikram for bravery during the War. Following the independence of the country, Moin served as Military Secretary to the President (MSP), Adjutant General, 46 Brigade Commander, Log Area Commander, and quickly rose to the rank of Major General at the age of 37.
Consequent to the killing of President Ziaur Rahman, in May 1981, a deliberate process of persecution of freedom fighter officers in the army began, and Moin also fell prey to this conspiracy. He was sent on deputation to the Ministry of Foreign Affairs and served Bangladesh as an ambassador before retiring from government service in 1998. He also served as an adviser to the caretaker government in 2001.
I had the privilege to come in close contact with General Moin as his deputy in Australia. I had also served under him in Singapore for a brief period. My first contact with him, however, took place in 1973 after my return from former Yugoslavia, where I had gone for treatment. Moin was the Adjutant General and I was posted to Adjutant General's Branch as a Staff Officer.
My admiration and respect for him increased after I attended a lecture he presented to the officers of the army headquarters, dealing with many burning issues of the day and calling upon the officers to serve the nation inspired by the ideals of the Liberation War.
An upright and honest officer, Moin was a strictly disciplined person. Moin had a sharp and witty mind, often sprinkling his sentences with quotes. He was deeply aggrieved for being pushed out of the army and especially for not having had the honour to serve as army chief, which he aspired to a great deal. It is a sense of deprivation he perhaps never reconciled with.I believe the Bangladesh army was denied of the leadership of one of the finest soldiers the country has produced.
General Moin was critical of political leaders who put party and personal interests above that of the nation. He never pandered to the powers that be and never compromised on matters of principle. These qualities perhaps cost him the post of army chief. Moin was deeply resentful of the political leaders running to the foreign ambassadors at the drop of a hat. He also detested the way these foreign diplomats behaved in this country.
I would fail badly if I didn't mention one particular aspect of his life. His wife, Ruby became a victim of multiple sclerosis early in life. I never found Moin despairing or losing attention to his wife. He was very devoted, loving and caring to his wife until his last day.
General Moin's Namaj e janaza was held in the Dhaka Cantonment Mosque, and was buried at the armed forces graveyard, following a state funeral. There were condolence messages in galore. Yet, a condolence message from the highest state authority was missing, which I believe Moin eminently deserved as a distinguished and decorated freedom fighter.
We salute you freedom fighter general. We salute you not because you were a General, but we salute you for what you did for this country and for what you stood for, above all for your undiluted and uncompromising patriotism. Your loss is not only irreparable for your family, to whom we convey our deepest condolences, but also for the nation, for in your demise you take with you another freedom fighter, which will never be born again.
May Allah, the Merciful, the Benevolent grant you His infinite Blessings resting your soul in infinite peace. Amen.
Ashraf ud Doula is a former Secretary and Ambassador.