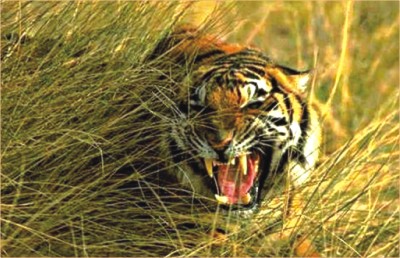 The Sundarbans tigers may be the smallest tigers in the world, suggests a new study.
The study was carried out by the Sundarbans Tiger Project, a joint initiative between the Bangladesh Forest Department, Wildlife Trust of Bangladesh (WTB), Zoological Society of London and the University of Minnesota.
The research was funded by the United States Fish and Wildlife Service Tiger and Rhino Fund.
There is only one species of tiger but scientists have split this into nine subspecies based on differences in their physical appearance and genetics, a release of the WTB said yesterday.
Tigers from the mangrove forest of the Sundarbans in Bangladesh and India are currently classified under the Bengal tiger sub species along with tigers across India, Nepal and Bhutan.
However, the tigers in the Sundarbans weigh just 76.7 kg, nearly half of the weight of other wild Bengal tigers, which average at 138.2 kg. This is also less than the average weight of tigers from any of the other 8 sub-species, making the Sundarbans tigers probably the smallest in the world.
Previously, it was believed that the Sumatran tiger was the smallest with an average weight of 86.7 kg. The reasons for the small size of Sundarbans are not known but the authors of the study suggest this could be related to the small size of deer available to tigers in the Sundarbans, compared to the larger deer and other prey available to tigers in other parts of the world.
Dr Adam Barlow from WTB said, “We always thought the Sundarbans tigers were small based on their track size, but until now we didn't know just how much small they really were. After all these years of people studying tigers it is exciting to dig up new information about this elusive and highly endangered animal and to see how it is adapting to live in different environments.”
Using a vast collection of tiger skulls from the Shanghai Science and Technology Museum, the researchers also looked at differences in skull measurements between subspecies, finding that Sundarbans tigers have slightly different skull shapes compared to other tigers.
These findings are preliminary due to the small number of specimens used and not enough to make the Sundarbans tigers a new subspecies, which would require genetic investigation.
However, their physical differences do increase their importance in terms of conservation, because these tigers have unique physical traits not found in other tigers. They are also the only tigers in the world to live in a mangrove habitat.
The Sundarbans is the world's largest mangrove forest, with 6,000 sq km falling in Bangladesh, and 4,000 sq km over the border in India. With approximately 300-500 tigers in the Bangladesh side of the Sundarbans alone, this area may also represent one of the best chances for saving the species, which probably numbers less than 3,500 individuals in the world.
These remaining pockets of tigers are threatened by poaching for the traditional Asian medicine trade, hunting of the tiger's prey for local meat consumption and destruction of their habitat to make room for expanding human populations.