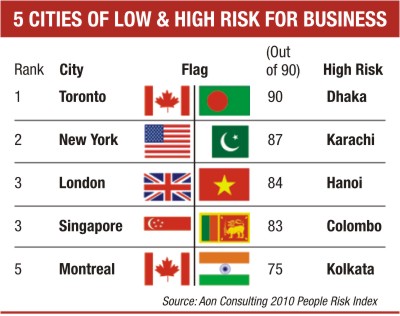 A study measuring the risks organisations face with recruitment, employment and relocation in 90 cities worldwide gave Dhaka the highest score of 90 countries -- but it's nothing to brag about.
It means Dhaka is the worst city for multinational employers who need to relocate workers, according to a new global study from Aon Consulting, a leading provider of risk-management services, insurance and reinsurance brokerage, and human-capital consulting.
Aon's People Risk Index looked at demographics, education, employment practices and government regulation. Rapid urbanisation, low literacy and poor spending on education were key factors for the five cities that received the higher risk ratings.
The highest risk cities after Dhaka were Phnom Penh, Cambodia; Lagos, Nigeria; Karachi, Pakistan; and Tehran, Iran.
A common contributing factor of the five with the highest risk is an urbanisation rate faster than the city can manage. Dhaka, the study notes, has at least 12 million people living in a city originally designed for a population of 1 million.
“The lack of […] education systems and training resources, coupled with poor government support and a culture of bias and favouritism, contribute to the high people risk that we observe in these cities," said Rick Payne, chief research officer of Aon Consulting's Singapore-based Global Research Center.
"Cities with low risk typically have a government that is transparent, non-confrontational and deals with employment issues fairly,” he said.
Shah Masud Iman, head of Human Resources at Standard Charter bank in Dhaka, says he experiences no trouble. The low cost of living here moderates the issues that the study found, he explained, because when executives come from overseas to Dhaka, their salaries are always at least maintained at the level they had in more expensive cities.
Toronto, Canada topped the Aon list, followed by New York, Singapore, London and Montreal. Canada's biggest cities received positive ratings because of strong government support, health and retirement benefits and training resources with less corruption, according to the report.
Employers face less risk in cities where they are unlikely to be surprised by changes in government policies on employment, health care and retirement. Openness to the many cultures of the world was also considered a plus.
“These employers also have more flexibility to restructure their operations without fear of incurring significant unanticipated costs," he said, because they then have fewer issues finding and retaining educated and experienced talent.
"As companies face these and other employment risks as well as take a close look at new investment opportunities in emerging markets, the ratings can help companies systematically and consistently assess the relative risks they face when hiring, employing and moving staff," Payne added.
The results were based on six months of quantitative and qualitative research by Aon's Global Research Center, with data from more than 100 statistical sources augmented by assessments from staff at the firm's 229 offices around the world.