In need of a facelift: Adibashi Mini Museum | The Daily Star
Skip to main content
বাংলা T
In Focus

In need of a facelift: Adibashi Mini Museum 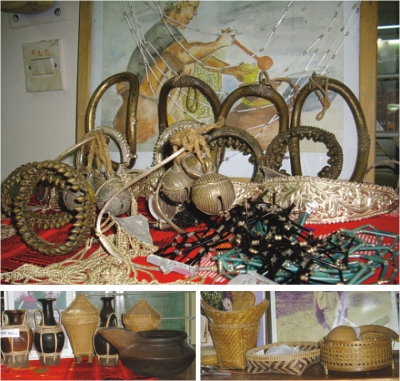 Among the attractions for the visitors are tools and objects used in agriculture and fishing, musical instruments and ornaments.Photo: STAR

Adibashi Mini Museum, housed at the CARITAS regional office, is a treasure trove of antiques collected from different areas of the greater Mymensingh region over the last 20 years.
The museum opened its door in 1991 under the initiative of CARITAS to preserve everyday items once used by the indigenous people of Mymensingh, Sherpur, Jamalpur, Tangail, Netrokona and Kishoreganj.
Among the attractions for the visitors are tools and objects used in agriculture, fishing and harvesting. On display also are ornaments used on traditional occasions both in the past and at present.
Maria Goretti, the keeper of the museum, pointed out that the museum houses some 150 items including traditional jewellery. The aim is to acquaint the younger generation with the diverse culture of greater Mymensingh region. The ornaments and musical instruments once used widely, makes us nostalgic and fuel interest in our traditional articles, said Maria.
Among the exquisite objects on display are a Kakshi (a pot used by the Cooch community to store beverage), Dikha (a vessel used at social functions and rituals), Umak (a kind of blanket made from the bark of herbs by the Garo), Thura (baskets), Nathuk (small drum), Dama (big drum), Adhuri (a musical instrument made of buffalo horn) and Fong (a curved vessel).
Ornaments like Bala, Khakkashal (worn particularly during dances), Thanka (arm bracelet), Righmachhu and Danga Sara (dance jewellery) also draw attention.
The collection at the museum also includes Millam Spree (shield and sword), Kimma (memorial post) and Burang (hut on posts in the hilly areas).
Dhiresh Chiram, who is associated with CARITAS' education and development programme, said that the museum's collection is limited but the concerned department can expand it. There is no adibashi (indigenous) museum in Mymensingh district, so initiatives should be taken to enrich this establishment, Dhiresh added.
Polinus Marak who seeks to promote indigenous traditions told The Daily Star that many antiques of the ethnic community can be found scattered in Mymensingh region and if collected with proper initiatives, a rich museum could be established here. Every article should have detailed description so that the visitors can get a clear idea about the collections, Polinus added. An experienced curator should be appointed to run the museum, he said.
Theofil Nokrek, regional director of CARITAS told this correspondent that under the 'cultural preservation' programme, the museum would be expanded in near future with more antiques, everyday objects and a modern infrastructure. “We have already undertaken such a programme and adibashi people have responded positively, which encourages us greatly,” he said.