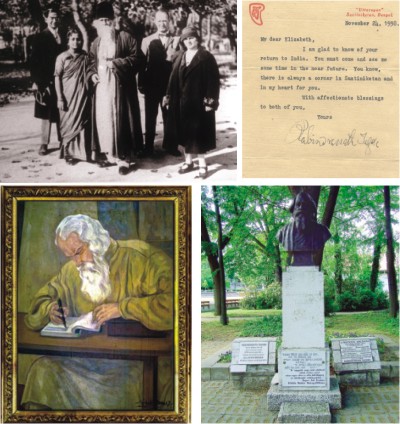 Tagore (centre) in Balatonfüred, on his right are Nirmal Kumari and Prashanta Mahalanobis. Tagore’s letter to Elizabeth Brunner. Tagore’s portrait by Brunner.

“I have seen almost all the countries of the world but I saw nowhere such a beautiful harmony of the sky and the water than that I had the privilege to enjoy on the shore of Balatonfüred filling my soul with rapture.”
-- Rabindranath
Tagore in a letter to Hungarian artist Elizabeth Brunner.
Hungary clearly cast its spell on Tagore as revealed in a fascinating photo-documen-tary exhibition of the Nobel laureate's letters to his Hungarian friends, photographs of him in the country and other memorabilia on display at the Hungarian Information and Cultural Centre in New Delhi.
The poet arrived from Vienna in Budapest on October 26, 1926. Invited for a poetry reading, the rigours of the intensive programme may have taken a toll on his health. Many of the photographs date back to his days at Balatonfüred where he had gone for treatment at the renowned cardiac hospital. Among the photographs in the Balatonfüred series are those of the poet next to the head physician at the sanatorium, of a Linden tree planted by him in the park on the banks of lake Balaton, which is still tended with affection by the people of Balatonfüred. A bust of Tagore presented by the Indian government stands under the tree. The area is a major tourist attraction. All important dignitaries from India visit Balatonfüred to pay their respects to Gurudev (Tagore) and plant saplings around the statue in the garden.
In reverse, Shantiniketan was a magnet for many Hungarian intellectuals of the time. Tagore invited Professor Gyula Germanus to teach in the newly established Department of Islamic Studies at the university. Germanus lived and gave classes there from 1929-1932. His wife Rozsa Hajnoczy chronicled their years in Shantiniketan in her popular book, “Fire of Bengal”. The book has run into several editions and, interestingly, the English translation was published in Dhaka.
Artists Elizabeth Saas Brunner and her daughter Elizabeth Brunner too came to Shantiniketan at Tagore's invitation.
“Tagore was a superstar in Hungary,” says Dr. Imre Lazar, director and cultural counsellor of the Hungarian Information and Cultural Centre, in a lighter vein. “Tagore did not feel he was among strangers but kinsmen who understood him deeply. The feeling was mutual. The memory of Tagore has been kept alive in Hungary which explains why the Hungarians strongly remember the 150th birth anniversary of the poet.”
The Hungarian interest in Tagore dates back to the first decades of the 20th century. After the poet received the Nobel Prize in 1913, his popularity rose to an all time high in the country. Over a passage of time practically all his works have been translated into Hungarian.
Tagore was a poet of the highest order and Hungary a country of poets and lovers of poetry. No wonder the twain did meet.