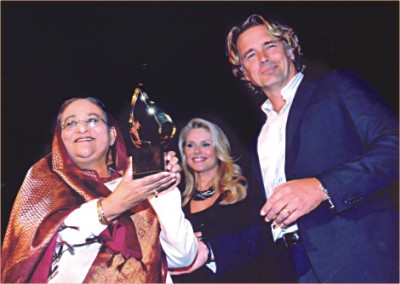 Prime Minister Sheikh Hasina holds up the UN award for her country's remarkable achievement in attaining the Millennium Development Goals particularly in reducing child mortality. The premier accepted the trophy at a hotel in New York yesterday.Photo: PID

Bangladesh received an UN award for its remarkable achievements in attaining the Millennium Development Goals (MDGs) particularly in reducing child mortality rate.
Prime Minister Sheikh Hasina accepted the award at a colourful function at Astoria Hotel in New York yesterday.
The award was conferred upon Bangladesh and five other countries a day ahead of the MDG conference on the sidelines of the 65th UN General Assembly (UNGA).
The award came 10 years after the general assembly of the global forum that had set the 8-point MDG at the UNGA session in 2000, which Sheikh Hasina attended as the head of the government during her previous tenure as Prime Minister.
Briefing the reporters about the event, PM's Press Secretary Abul Kalam Azad said Bangladesh was given the award in recognition of the government of Sheikh Hasina's efforts in reducing child mortality by 50 percent during the current tenure of her government.
The award committee highly appreciated the premier's personal leadership in spearheading a campaign in achieving the MDGs.
Speaking on the occasion, Hasina said the award will encourage Bangladesh in strengthening its efforts for achieving all the MDGs by 2015 despite the adverse impacts of the recent global economic crisis and climate change.
The premier said she always considers children's welfare as very close to her heart. In this regard, she quoted Nobel Laureate poet Rabindranath Tagore as saying, “every time a child is born, renews my faith that God has not given up on men.”
“This gesture is particularly encouraging to us as we have been sparing no efforts in achieving all the MDGs by 2015 despite the adverse impacts of the recent global economic crisis, global warming and climate change,” Hasina said, speaking briefly while receiving the award.
The PM's press secretary said the annual MDG awards were intended to support and raise awareness about the UN development goals while the global forum had set a deadline of 15 years for the member nations to achieve them.
The award giving ceremony came only few hours after Hasina arrived in New York to join the UNGA.
Finance Minister AMA Muhith, Planning Minister AK Khandker, Health and Family Welfare Minister AFM Ruhal Haque and Foreign Minister Dipu Moni were present.