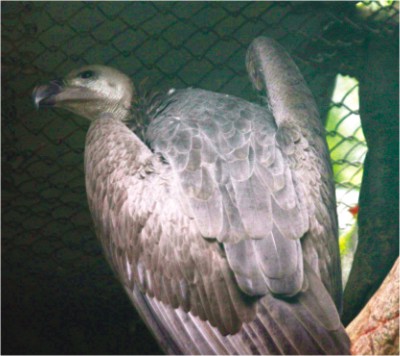 Oriental vultures are disappearing so fast that their population dropped by 95 percent in Bangladesh in the last two decades, due to feeding on carcasses of cattle treated with anti-inflammatory drug diclofenac, said experts.
Diclofenac is widely used in human medicine globally, and was introduced to the veterinary market in the Indian subcontinent in early 1990s.
It has been proven that the drug causes fatal kidney failure in vultures, said Dr Monirul H Khan, a zoology professor at Jahangirnagar University.
Vultures show an unusual behaviour of "neck dropping" after eating carcasses tainted with diclofenac, and die in few days.
In the wake of the population crash, white-rumped vultures, long-billed vultures, and slender-billed vultures are now classified as critically endangered, Dr Monirul added.
Dr Rhys Green of the zoology department at University of Cambridge, who is also a member of the Royal Society for the Protection of Birds, said in an article, "Diclofenac poisoning is the main, and possibly the only, cause of the vulture decline."
Just two decades ago white-backed vultures used to be a common sight across the country, especially in the plains and woodlands. But now they are so rare that a group of birdwatchers of Bangladesh Bird Club found only three breeding colonies when conducting a census in 2008.
Sayam U Chowdhury, a wildlife photographer, said a colony of 13 to 15 is in Maulvi Bazar near Hakaluki Haor, another group of 15 to 20 is in Nabiganj of Habiganj, and a smaller group of 5 to 10 is in Mymensingh.
Though the vulture population is declining fast, and bird experts and conservationists placed them among the species most threatened with global extinction, Bangladesh has yet to make any significant move for conservation.
So far, no attempt has been made in Bangladesh to quantify the extent of diclofenac's use in veterinary medicine, nor is there any evidence of the actual magnitude of vulture exposure to it.
Dr Manirul, who is conducting a research on endangered vultures in the country, said India and Pakistan banned diclofenac in 2006, and Nepal banned it in 2009 as a part of vulture conservation efforts.
Those countries deregistered the drug, preventing its import while promoting use of meloxicam as a safe alternative, he added.
When asked about diclofenac, a prominent pharmaceutical expert said the drug is cheap, and used widely to treat inflammation, pain, and fever in livestock.
Now more than 100 manufacturers are producing diclofenac sodium tablets in the country while around 20 companies manufacture an injection variety.